So getting the flu on Sunday evening makes it hard to write a blogpost for some reason :) So here's last weeks and check back later for today's!

In this episode we finally get back to Belle, but without completely losing the other threads of the stories. It was a nicely balanced episode. In Storybrooke Regina is finally up to her old evil conniving ways and makes Belle revert back to her cursed self. Rumple tries to woo her back and learns completely the wrong lesson. Snow and David Charming are knee deep in plans to go back to Fairytale World and Neal proves to be even more adorable at swordfighting with Henry than David was. In flashback Fairy world we get more proof that Rumple and Belle are meant for each other and Robin Hood makes a brief appearance.


I thought this was a great episode and, even though I thought I was done with the whole evil Rumple/Belle stops him thing it was handled so amazingly in this episode with a twist at the end I really didn't see coming.

But more on that later.

Watching Regina realize that she is twistedly related to Rumple was absolutely hilarious. But in that conversation can we just say that it was the most literal pot calling the kettle black of ever.

I understand why they kept the beans from Regina, but honestly, did they really not think that she would figure it out?

I don't understand what they think they're going back to! Snow knows that most of it is completely gone. What is there left to go back for? I hate sad face Snow. Gah! make her happy again.

I do like getting the cameos of the giant, but I miss having the dwarves *cough*Leroy*cough* around town as much. 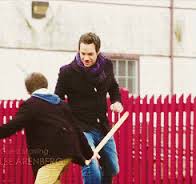 It is great that Emma is confiding in Neal and I really hope he doesn't go anywhere. Because of course we know that his fiance is in it for the power and is sleeping around on him, so we can just ship Emma and Neal with no regrets. It's more of that black/white dichotomy that tends to happen in this show, which fits the fairy tale premise.

I was so happy to have Belle back. Even in her memory-loss state she was starting to be Belle again. I was begging Gold not to lie to her about healing her and then he just kind of side-stepped it without really denying it. But then to lose all that with Regina's matchbook trick was so sad.

Gold going to David for advice was perfect - after all, they're the only real happy ever after that just keeps working out. But Rumple isn't really the wooing kind of guy. He was trying so hard and I love the look on his face when Lacey gave that line that showed there was a tiny vestige of Belle left. This episode is probably the best I've liked Rumple this season (except for his good-bye phone call to Belle *sob*).

I love that blue on Lacey/Belle. And she plays the other part really well. But I want Belle back! But this is going to be SO much more interesting. So I'm contradictory.

So the Sheriff of Nottingham is a bartender at The Rabbit Hole. So hm. Also kind of a sleazeball. Also it was bad to see Rumple lose himself, but worse to see Lacey admiring him :(

did anyone else wonder where the hay bale all the blood on Rumple's apron came from? Because Robin Hood was pretty much untouched. So yeah. I know. Family show and all. But they could have done some kind of camera angle thing to make you think there was a wound, but you see all of him. Only a tiny bit of blood on his face. I think I may have watched too much Walking Dead.

I was honestly expecting the trailer to open and reveal Robin Hood at the end (who, btw, was pretty cute), but of course it's Hook. I kind of wonder if they have any idea how many times Hook has FAILED though.

A great episode and I can't wait for tonight's!