Thank You for the Drama

I have been watching "General Hospital" for 18 years.  I love escaping to the fictional city of Port Charles on a daily basis. One of my favorite memories of working at Borders was sharing my love with my co-workers, and fellow fans, Jess P. and Claire.  "General Hospital" celebrates its 50th Anniversary today!! I think even non-soap fans would have to admit that 50 years is an accomplishment worth celebrating. 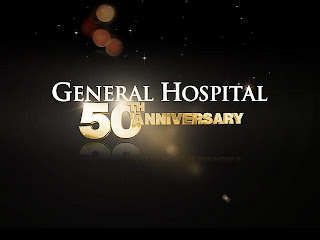 I want to thank everyone involved with "General Hospital," for bringing these stories to life and providing my friends and I with endless hours of entertainment.  Some people snicker at my love of soap operas and dramas.  However, they fail to realize that shows of this nature require fresh written stories, to produce episodes approximately 200 days out of the year, along with a full cast of actors/actresses to perform them and a crew to capture the action.  The creative ensemble required to put an hour long show everyday is phenomenal.

I would especially like to thank Claire Labine, General Hospital's Head Writer from August 1993 to March 1996.  Her stories provided me and my friends with our fondest, albeit most heartbreaking "General Hospital" memories.  These stories included the tragic tale Kawasaki disease stricken young Maxie receiving a heart transplant from her cousin who died in a bus crash, Monica Quartermaine's bout with breast cancer and HIV-positive Stone Cates and his girlfriend Robin Scorpio.  These stories linger with me almost two decades after they aired.  How often does the average TV show do that?

Of course in addition to these heart wrenching stories, the show is also filled with romance that makes your heart soar.  Under the current head writer, Ron Carlivati's reign, I am currently rooting for Sabrina Santiago, the slightly geeky but super sweet nurse with a frizzy mess of hair to win the heart of the widowed Dr. Patrick Drake.  My other favorite romance was the pairing of Emily Quartermaine and Nikolas Cassadine.  As an awkward teenager, the slightly older Nikolas failed to see Emily as anything more than a friend but once she grew up the friendship blossomed and the duo become one of the show's biggest super-couples.  I'm a sucker for unrequited love finally being requited.

Speaking of Emily and Monica Quartermaine, this post would not be complete if I didn't talk about my love for the families of "General Hospital."  The always fighting, back-stabbing but always their for each other Quartermaine clan is my favorite.  If I could join any fictional family, that would be the one.  I'd love to tell Tracy to stuff it, in "Monica's house," although that would complicate by un-family love type feelings for the just back from the dead A.J. Quartermaine.

Happy 50th Anniversary, General Hospital!! Thank you so much for all the wonderful memories.  I can't wait to see what else lays ahead for the citizens of Port Charles.

If you're a fan of "General Hospital," I'd love to hear from you!  Post some of your favorite memories below and join me in celebrating their 50th Anniversary today.