Bernadette Fox is a mystery to everyone, but to her 15-year-old daughter she's both mother and best friend. Bernadette simply doesn't fit in. She's a brilliant architect who walked away from a promising career, married to a Microsoft genius, and far too eccentric for the private-school mothers who can't seem to understand where or how she fits into the neighborhood. When Bee gets straight A's she claims her reward - a trip to Antarctica with her parents. Bernadette is terrified of ships and is developing serious agoraphobia. After a series of very unfortunate accidents, Bernadette disappears and Bee is left to piece together the events that led up to her mother's vanishing. Told through Bee's narrative interspersed with e-mails, notes, and police reports, the narrative will keep you guessing, and laughing, as you journey with Bee to reunite herself with her mother and uncover the truth.

Want to own it?
Chapters
Barnes & Noble
Books A Million
Find an Indie bookstore near you!
We don't support any particular store or company, but do ask that you support your local brick and mortar store to keep them in business. If they don't have the book, most stores are more than happy to order it for you too! This gives their store the business and helps you get the book you want :)

Jenn N.: Where'd You Go, Bernadette? is a fun, fast paced mystery. I enjoyed the unique format that combined letters, e-mails, and other correspondence to tell the story along with Bee's narrative. The book had me guessing what happened to Bernadette up until the final pages. At times I thought her husband did her in, other times I wondered if the crazy neighbor was behind Bernie's disappearance or if Bernadette did herself in or just ran off. The only downside to this novel was that the reveal was a little too neat but yet still felt slightly unresolved. However, it was still a good read that is perfect for the beach read season.

Rebecca T.: I really enjoyed this book. The unique style won me over immediately, and I adored the quirky sense of humor that shone through so much of it. By combining first person narration from Bee's perspective with the e-mails, documents, and letters Semple weaves together a story that is filled with mystery, intrigue, humor, and just a touch of heartbreak that will keep you reading until the end. I did find the resolution a bit convenient and, like Jenn, slightly unfulfilling, but overall I thought this was a fun read. 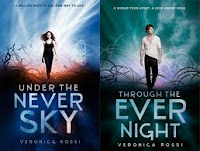 Since we took the month of May off for book club, we decided to read both Under the Never Sky and Through the Ever Night by Veronica Rossi for June. Check back for our reviews and feel free to leave your own thoughts on Where'd You Go, Bernadette? below!
Posted by Rebecca T. at 8:00 AM