Welcome back Truebies!!! Can you believe Season 6 of "True Blood" is just 7 days away?!  It seems like just yesterday we were crying over spilled-milk- er, blood of Lillith for the next season.  Next week, I plan on bringing you all the gossip I've overheard at Merlotte's as to what kind of trouble our Bon Temps friends are in for this season.

In the meantime, the "Southern Vampire" novel series by Charlaine Harris on which "True Blood" is based came to a close last month with
"Dead Ever After," the 13th entry in the series.  In "Dead Ever After," Arlene Fowler returns to Bon Temps after getting bailed out of jail for her part in trying to kill Sookie way back in "Dead and Gone."  Shortly after her return, Arlene is murdered and Sookie is set up and arrested as prime suspect #1.  Fortunately Sookie's friends past and present stand up for her defense.  She is promptly bailed out and is determined to find out who set her up while sorting out her feelings towards a new but familiar romantic interest. 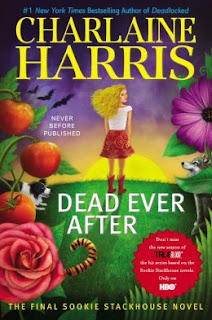 While I am sad to see this great series come to a close, it's better to end a series high than drawing it out until to a weak close.  This entry clearly shows Sookie's growth from the shy virginal cocktail waitress we met in "Dead Until Dark," to the confident bar co-owner she is here.  While the choice she ultimately makes for a romantic suitor may surprise and upset some readers, it was a choice that I felt was perfectly suited for the woman Ms. Stackhouse has become.  Pretty much every character in the Sookie-verse is given a satisfactory conclusion in this novel.  In addition to Arlene, this novel also features the return of Amelia Broadway, Quinn and several of Sookie's enemies who I won't name as I don't want to spoil the book for you.  However, I was disappointed that Bubba was conspicuously absent.  Perhaps, Charlaine is saving Bubba's story for the forthcoming "After Dead," an epilogue to the series which promises to answer how the remainder of our favorite characters lives and afterlives played out.  If you haven't checked out "Dead Ever After" yet, what are you waiting for?  If you've already read it please share your - spoiler free- thought below.