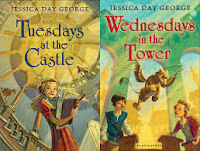 I picked up the first book on a whim and savored it. I loved it so much, but I thought it was a stand-alone novel. So when the second book arrived at the book store I shrieked and danced in the kid's department. Seriously. Without further ado... 10 things I loved about Tuesdays in the Castle and Wednesdays in the Tower by Jessica Day George!