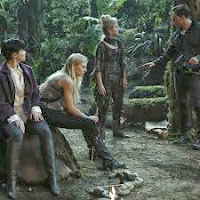 This week the band of misfits sets out to find clues from the one person who has ever left Neverland alone and Hook leads them to Baelfire's cave of wonders. Rumple hallucinates and promises to do everything, including sacrificing himself, to protect Henry, prophecy or no and Neal teams up with Daddy dearest to overpower Peter Pan. Meanwhile Pan tries to get into Henry's head and finds it a lot harder than he anticipated. In flashback we see Rumple and Bae's relationship dissolving and witness the first meeting between the Dark One and Pan plus the origins of the Lost Boys.

I adored this episode and there were two main reasons: Peter Pan and Neal.

I have mentioned the casting before, but Robbie Kay plays Peter Pan with a brilliant intensity somehow capturing every nuance of the character. I actually got goosebumps during his speech with the Dark One in the flashback. You want to hate him, but you also want to love him and all I can say is that we had better get a Peter Pan origin story soon.

"Nasty Habits" was all about isolation vs. belonging. Pan obviously feels isolated. Even in the midst of his Lost Boys he has noone he really connects with on an equal level, but all he can do is keep drawing more and more boys who feel the same way. He has a hard time getting into Henry's head because Henry belongs. He has 2 mothers, a father, and several grandparents who have all proved that, no matter what differences they may have, they all agree on their love for Henry. When he really begins to accept Neal's "death" and remains isolated from his family, that is when Henry begins to be able to hear Pan's music and to slowly be drawn into the life of the Lost Boys, though I certainly hope we see him pull back. His steadfast belief in his family is too strong to be overcome so easily. Emma finds herself alone once again. Having finally found Neal she has lost him once again and her relationship with her parents is still too strained for them to be enough comfort. Which is probably why she and Hook are drawn toward each other as he is also outside, but longing to belong. And David is desperate to keep his family together as long as possible, which is why he doesn't tell anyone what is happening. And if they don't find some magical way to keep him alive I'm just saying that heads will have to roll. Ahem. 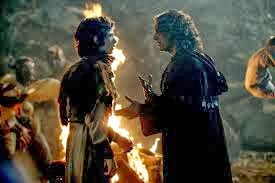 Belonging is the center of Rumple's struggle both in the flashback and in Neverland. He wants to be a family with his son, but his insecurities and selfishness effectively drive Bae away. Now that Neal has returned, it's going to take time for Rumple to prove that he really has changed. Which of course, deep down inside he hasn't quite. The moment when Rumple accuses Neal of being an hallucination and Neal just says, Papa? was completely heartbreaking. The emotional intensity of this episode had me completely engaged throughout.

The twist of Pan with his pan flute being the pied piper was such a great twist and fits into the mythos well. And the idea that only the lonely and unloved boys could hear the music adds a nice touch. And I need to know how it is that Rumple grew up with Peter Pan. I need this story. Can you imagine the casting of a young Rumple? If they do it as brilliantly as they have done most younger versions of the characters then I am really looking forward to it.

Was anyone else yelling, "Second star to the right and straight on till morning" when Baelfire's star show started? And I would just like to say that that was one impressively carved coconut shell.

And when Neal calls up the squid I admit that I bellowed, "RELEASE THE KRAAKKEN." snrk. Who knew squid ink was so powerful.

Favorite line of the night is a tie.
David's retort to Hook when he says, "And I'm plenty hot" was hilarious. I actually rewound it because I was sure I had misheard it.

And Regina's best line in a really long time and pretty much her only contribution to this episode was her quip, "Yes, because preteen Baelfire probably made lots of pasta." That one got a good long laugh from me.

And I have two final thoughts. The first is on the prophecy surrounding Rumplestiltskin and Henry. I am fairly certain that his decision to turn his back on Belle's advice and his own conscience and go after Henry is the thing that will end up becoming his undoing. When he heard the first prophecy, where the seer said that his actions would leave Baelfire without a fire, Rumple responded with the act of cowardice that led to his evil obsession with magic and power and, as we all know, led to his loss of Bae. Turning his back on Henry and choosing to try to kill him will, in the same way, be the action that could lead to his complete downfall. Here's hoping he makes the right decision in the end, because I seriously can't imagine the show without either Rumple or Henry.

My other question is in regards to Pan's declaration that Henry is there to save the magic. Why is the magic in danger? What magic is he supposed to save and how? Pan has been looking for Henry for an extremely long time, but there don't seem to be any issues with people using magic.

So many questions! And next week's episode looks really good. Can't wait!
Posted by Rebecca T. at 1:29 AM