Tonight in Neverland, as the band of misfits tramps through the jungle trying to find Henry, they actually find themselves getting along better than they would have guessed. Odd man out, of course, is Regina who still believes that magic is the answer to everything. Because that's worked out so well for her in the past. Charming and Hook actually agree more than once, to which Hook responds in his lovable snarkiness, and Emma has to come to grips with who she is if she ever wants a chance to save her son.
Meanwhile Rumple cuts off his shadow and starts hallucinating Belle and finds that it's a lot harder to get rid of a little straw doll than you might think.
In a flashback to the Enchanted Forest, Charming uses good old fashioned psychology to trick Snow into believing herself when Regina offers her the easy way out. The dwarfs play the over-protective brother role to a T, and Rumple plays his enigmatic self.

The big themes of the week were identity and decisions and the way our understanding of the one influences the other. 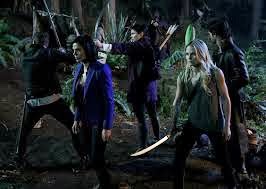 When Emma is given the map by Pan, she has to come to grips with who she really is. Of course, everyone (including me) immediately think that she's still unsure about her role as the savior and as the daughter of Snow and Charming. When she lists the truths about herself, I even noted - just because she says it, doesn't mean she believes it. And I still believe that is true. However, the exercise went deeper than that and connects quite nicely to the core issue in Peter's psyche - the abandonment of a child by his or her parents.

In the original story Peter returns to his home after having left, and finds another baby in his place, causing him to believe his parents no longer want him. The issue of child abandonment, of course, runs rampant through the Once Upon a Time universe. Emma is sent to our world by her parents and grows up in the foster system, feeling abandoned. In some of her best acting to date (imo) Emma's admission to her lonely childhood was absolutely heart wrenching and brought my first tears of the season (of course I'm a softy who cries at Cheerios commercials, so what do I know ;) It makes sense that she's having a hard time calling Snow "mom" (other than the bizarre age thing). Calling her mom would remind her that for most of her life, her parents were just a dream and people she cried over. And the fact that they are here now, doesn't make up for years of feeling unwanted. They may have had some moments because of, as Snow puts it, being about to die, but it's going to take more than an apology for Emma to put all of that in her past and accept the Charmings as her parents. 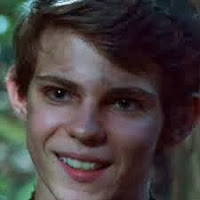 Then of course, Pan references Henry's abandonment by Emma and we know that Baelfire was abandoned by Rumple. Plus Rumple himself was abandoned by his cowardly father. Regina may have grown up with her mother, but I think we can all agree that Cora's brand of motherly love left Regina feeling emotionally abandoned. And Snow, though not voluntarily abandoned by either parent, is still left an orphan who is completely abandoned by her stepmother.

The question becomes - what are the characters going to do with this? How will they let it define who they are and who they will become?

Rumple begins to hallucinate the one person who has always been able to see good in him. He recognizes his cowardice for the first time in a healthy way - of realizing that his fear has caused him to lose everything he cared about. And now he has to make a decision. Does he take Pan up on his offer and abandon his grandson the way he abandoned his son? Or does he put himself on the line and save the one person in all of the realms who has been foretold to be his undoing? Whatever that little doll is, it certainly represents something significant in Rumple's past and it's not quite so easy to simply leave your past behind you. 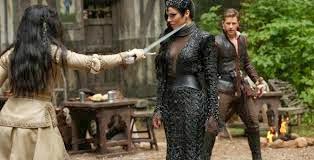 In the flashback, Snow's story felt a little bit too obvious to me, but it was totally worth it to see the dwarfs go all tough on Charming. In a hair aside - Snow seriously needs a comb and major conditioning. But I also appreciate the fact that it looks like she's been on the run for years and then been under a sleeping spell. But I wanted to attack her head with some major hair products. Charming on the other hand had obnoxious Prince Ken hair that I wanted to swat. That curl at the front looked absolutely ridiculous.
Ahem.

And the one character who just doesn't ever seem to change, no matter what, is Regina. Even after all of the disasters one after another that have come about because of her reliance on magic, it is still her crutch. She may not like being called the Evil Queen, but every single week, even when the writers are trying to convince us she's redeemable, she proves that evil is not born; it is made - with every decision she makes. And every time she decides to take the "easy" way out or to break the rules in order to get what she wants, she pushes herself farther and farther into that role and further from being the woman who could be a part of Henry's life in any significant way. 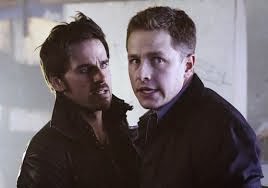 And for some lighter commentary on the episode. I adore Hook and I don't care that he has no real storyline at the moment as long as they keep giving him the snappy one-liners that he can just nail the delivery on every time. My favorite was the conversation between him and Emma when he asked how the stories depicted Hook:
"If wax mustaches and perms are your thing."
"I take it by your tone perms are bad?"

Also, the actor playing Peter Pan is so creepy. I think it's great casting.

Was it just me or did Charming look incredibly uncomfortable in those pants in that last beach scene?

And btw, if they kill Charming off I don't think I will be able to forgive them.

So what were your favorite moments of this episode? And do you think Emma will ever be able to forgive Snow and Charming?
Posted by Rebecca T. at 12:24 AM