In tonight's episode, Regina can't take camp-time with the Charmings any longer so she heads off and winds up teaming up with Rumple while the rest of the band of misfits finds their way to the Echo Caves where they have to reveal their deepest secret to save Neal. In the flashback Enchanted Forest Snow teams up with Ariel, the little mermaid, to fight Regina and help Ariel's dreams come true, but true to Once Upon a Time form, nothing is what it seems, and the story is not the one you remember. 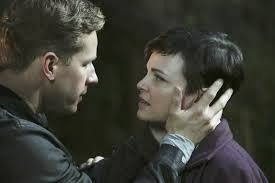 The Echo Cave brought everything out into the open and only time will tell how these secrets will affect them all. The funny thing is that the most established couple is the one that seems to have been hit the hardest. Snow reveals that she wants another baby at the moment that David has to admit that he's lied to her for days and that now he can never leave Never Land. It wasn't the lie so much as the fact that he stole from her the chance to make the decision together. I don't doubt for a minute that Snow would have been the first in line to say that David's life had to be saved, even if that was the cost. Losing the opportunity to make that decision smacks of distrust for her. Secrets tore her family apart and every time Snow has kept a secret, someone she loved paid the price, which is why she can't lie to Emma about Neal. She offers Emma the chance to save the man she loves but only by finding out that her true love stole that very chance from her. When she says, "Secrets always seem to keep us from the people we care about" and David responds, "And sometimes secrets protect the people we care about" their difference in philosophy becomes crystal clear. And the question is will true love be enough to get them through?

Hook's admission was heart wrenching. To know that Emma has given him back a piece of himself that he thought was lost forever and to have to reveal it so she can save her love-at-first-sight is the bravest sacrifice we've seen him make yet. And Emma's revelation that finding Neal alive is so much harder because now she has the chance to lose him all over again, brings up doubts, pains, and insecurities she's been fighting her whole life. The look on Hook's face when Neal tells Emma that his secret is that he will never stop fighting for her...

Now for some more rambling thoughts about the episode.

I still love snarky, evil-with-a-purpose Regina. She had my favorite line of the night. Again. "You want to follow the evil munchkin's dirt road, be my guest."

Pan's shadow is infinitely creepier than Pan himself, which is saying something, and who knew it could also shape shift like that? Um, now I feel like I can't trust anyone.

For just a moment we think that maybe Regina is heading in the right direction when she admits that they might not have to kill Pan... and our hopes are immediately crushed when she agrees that a fate worse than death is always better (something she inflicts upon Ariel, of course, at the end of the flashback).

As Pan called Rumplestiltskin "Rumple" I was trying to think if any of the other characters call him that. I've been calling him that since I started writing these recaps, but now I honestly can't remember if anyone on the show calls him that or not. Anyone know?

Anyhoo... Rumple's greatest dilemma is revealed to us as well - will he choose Belle and the future? Or Neal, Henry, and his death. Regina's convinced that his self-preservation is too strong, and she might be right. Or not. The problem with Regina is that she has become so blinded that she doesn't understand being driven by love. She says she does and she pretends she does, but she has spent most of her life chasing anger, fear, and revenge. Even her love for Henry becomes more of a power trip than real love. She reveals this when she tries to teach Emma how to use her magic. She encourages her to harness her anger and, though it does result in a lit fire, it's been repeatedly made clear that Emma's strength in magic isn't driven by rage; it's driven by her intense love for people around her. This is why she's so afraid to let Neal back in. Every time she's loved someone she's been hurt and they've been taken away from her or left her. Her parents abandoned her and she grew up unwanted. She leaves her son and even when she is reunited he's torn between her and Regina and then is kidnapped. Neal leaves her and then is killed in front of her. But the remarkable thing about Emma is that she still has this great capacity to love and she does, whether she wants to or not. She tries to cover it up, but she wouldn't get hurt so easily if she didn't care just as easily.

Going back to Rumple and Pan's conversation, it has become clear over the last couple of weeks that Pan preys on parent/child dysfunctions - something this entire group is rife with. Maybe that's why Henry is so special. Despite being abandoned by his mother, raised by an evil witch and everything else he's gone through, he is still strongly attached to his family. Maybe he is the chosen one, because he is the only one who can ultimately stand against Pan's manipulations, even if he's started to fall into them. We didn't get a chance to see his behavior after learning that they've come to Neverland to rescue him.

On a lighter note, I loved Snow's reaction when she comes upon the high cliff overlooking the water when the soldiers are chasing her. Because this seriously happens in every chase scene through a forest. I love that the show's not afraid to poke a little fun at themselves. 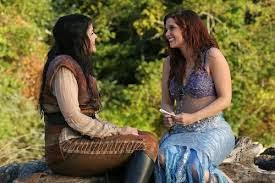 When she meets Ariel and they keep repeating the word "myth" all I could think about was the running gag in The Muppet Movie and I was just saying, "Yeth?" back to the tv through that whole scene.

I thought the casting on Eric was well done. He's got a similar facial structure to the Disney movie version and Ariel was fairly well cast too.
However, I did find it outrageously awkward that no one else joined in dancing once the two of them were. That conversation would have been so much better if it had been in the midst of other dancers rather than as a spectator sport.

And of course, secrets play a big role in the flashback as well. Ariel's refusal to share her secret with Eric destroys her chance at a happy ending and puts Snow's life in danger too. Her loyalty to Snow made up for half the mistake, but Regina ensured that the other half couldn't be rectified... until now, of course. Eric somehow got swept up in the curse and he's the perfect bargaining chip to hold over Ariel's head. Since I trust Regina as far as I could throw her, though, I have to wonder what Regina isn't telling Ariel about Eric.

And nice twist with Ursula being the sea goddess instead of Ariel being daughter of Triton the sea god and the human thing being part of a yearly gift rather than an evil plot. And it was just absolutely ridiculous when Regina as Ursula said that Ariel could "be a part of his world." *groan* but funny nevertheless.

And what's all this about mermaids being able to cross realms? You'd think someone would have mentioned that before since Neverland is known for its mermaids. Unless, of course, that's only in the stories, not in the actual Neverland. But it seems mighty convenient that Rumple can just "pop home" to pick up his secret weapon when they've been worrying for days over how they're going to get home once they save Henry. Regina didn't think to mention this before?

I'm excited to be heading back to Storybrooke next week. I love Neverland, I really do, but I need my Grumpy fix!
Posted by Rebecca T. at 12:02 AM

I think Belle has often called Rumple...Rumple. And by Belle I mean the real Belle who's back in Storybrooke, not Shadow Pan's Belle (though it did that too I think).