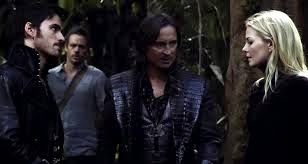 Tonight we go back in time to the Rumple's childhood, the beginning of Neverland as we know it, and the most shocking and bizarre twist on parent/child drama we've seen yet. And on this show, that's saying a lot! Meanwhile Emma is taking the "Snow" role in determining there must be another way to save David, which of course there is (we hope). Everyone, but especially Neal, has to decide whether Rumple is trustworthy or if he's out to save himself, and Pan's evil plot comes to a head as Henry has to decide whether to believe his family or Pan.

Trust was the theme of the episode: Who can you trust and who should you trust. And in classic Once Upon a Time style, the question is focused on family. Can you trust your family, even if they have shown themselves to be deceitful in the past? Family can be a strength and a liability. The question raised is which one win out - by the end of the episode it certainly seems that family is much more of a liability.

Rumple as a little boy was adorable, and it was striking how many similarities there were between his story and Bae's. Both had fathers who were seen as cowards. Both had fathers who were willing to sacrifice their sons in order to gain power or respect. Both swore they weren't going to be like their fathers. And both are now having the opportunity to redeem themselves.

Side note: The casting they did for Rumple's father was perfect. He's got a lot of the same twitchy mannerisms and the same laugh. So wonderful. 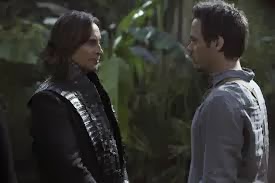 In all of his struggles through his life (of what we've seen to this point, anyway) Rumple has tried to avoid becoming the man his father was. But every step he has taken has moved him in that direction anyway. When it comes down to it, his response to his father (!!!!! but we'll get to that in a minute) is that the difference between them is that he regretted his actions immediately and has spent his life trying to find Bae again. He risked everything to leave Storeybrook last season and his only purpose was to find his son and try to make it up to him. For Rumple's father there doesn't seem to have been any kind of repentance. Even in what we've seen on Neverland so far, he's done nothing to show that he wants what he claims to want at the very end. Other than claiming the doll's name (which I'll get to in a second), the only other thing I can think of is that bringing the Lost Boys to Neverland was Pan's way of trying to reclaim his son and to keep other boys from suffering the same fate that he thrust upon his son in his quest for youth.

And I seriously want to go back and watch every single scene between Rumple and Pan again, just to see if there are any clues I overlooked!

Speaking of which. PAN?! Holy cow, I totally did NOT see that one coming. How on earth can this possibly be? My actual reaction was this: WHAT JUST HAPPENED WHAT THE HAY BALE AND I HAVE NO ABILITY TO CAN

I kid you not; that was what my fingers typed as I gaped at the tv.

So, not only do we have the twist that the forever boy is actually Rumple's father (and Neal's grandfather ... and Henry's great-grandfather and all those other bizarre family connections that now have my head spinning), but Pan's shadow used to be the only thing living in Neverland and it isn't actually Pan's shadow at all. Plus, there's a time limit on Pan's life. 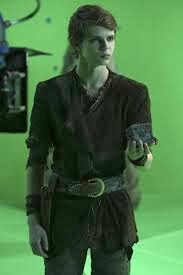 We also have proof that Pan has been a liar from the beginning. He lied to his Rumple repeatedly, he became Pan through a lie to Rumple, he pretty much lies to the Lost Boys continually, and now he's flat out lying to Henry's face to gain more power. This is the thing that makes me believe that he never truly regretted his decision. Rumple is willing to sacrifice his life to save Henry. Pan is willing to lie to Henry to get him to sacrifice his own life so he can live forever. This is not the action of a repentant person.

And hello, what do we do now that Rumple is in the box?! GAH!

The idea of naming came up several times in this episode. We finally see the real significance of the doll Rumple's been mooning over and as soon as Peter Pan asked why Rumple thought he'd used that name I knew it had to be. His father says that "naming makes things better" and then he steals that name in order to further his own power.

And of course, we learn why Rumple is such a good spinner.

Going back to the idea of trust, it becomes really clear throughout the episode that Rumple couldn't ever trust his father. Even now. However, it does seem that Neal can trust Rumple. So often it has come down to his own self-preservation and Rumple has chosen himself, but there does seem to have been a genuine change. And for some reason I buy it and believe it with Rumple in a way I never did with Regina. Maybe it's because he's still manipulative in his "deals" (how mad was he that he couldn't get anything for saving David's life?), but when it comes to family, he's quite intent on taking care of them now. Snow and David are still having a crisis of belief, but Emma comes out as the strong one, determined to find a way to save them all. 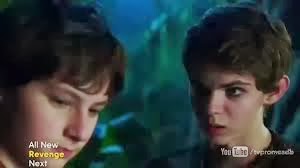 And of course the largest test of trust comes in the end when Henry has to decide who he can trust. Does he trust his adoptive mother who lied to him for most of his life, his mother who abandoned him and lied to him about his father, and his father who he has only recently discovered and hasn't had time to develop a relationship with OR does he trust Pan who kidnapped him, but who has used the exact right manipulations with the "sick" Wendy routine and Henry's burning desire to be a hero? When it comes down to it, Henry, surprisingly, doesn't have the faith in his family to believe that they are telling the truth. It does fit with his character and his need to save everyone, but I was so disappointed that he would turn away from his family. Failing to trust them may have cost him his life.

Other notes from the episode:

How much water do you think they need to bring back? And what are they lugging up the mountain to carry water back to the ship? How much and how often will David have to drink? And if Rumple is in Pandora's box, then WHAT ABOUT DAVID?

I found the box thing a little bit lame. But it does set up the next episode (at least from the previews) with the importance of imagination and belief in Neverland. If Pan could steal the box, then they can just figure out how to turn that idea against him. Can they believe Henry's heart back in his chest?

A couple of my favorite HA moments:

David throws Hook the knife and says, "Here, in case your good looks fail you"

The look Regina gave Rumple when he asked if she remembered the spell was priceless.

I also just realized that pixie dust grows on trees, but fairy dust has to be mined. I feel like there's some sort of weird significance in this.

They had better take like a few barrels with them to carry water. How much and how often does he need to drink?

And these were my notes from the Pandora Box to the end of the episode:

You have got to be freaking kidding me.
______
So I might be a little excited about the next episode. but we have to wait 2 whole weeks!
Posted by Rebecca T. at 12:04 AM