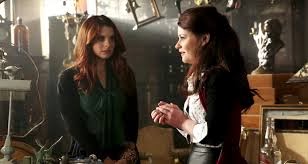 Tonight it's back to Storybrooke where Ariel and Belle team up to find Pandora's Box and escape from the clutches of Pan's henchmen. Who of course, are just blackmailed Darling brothers trying to save their sister. Henry resists Pan, but Pan plays off his tender heart and trusting character to maneuver Henry right where Pan wants him. Snow and David fight and make up. Again. Emma has to control her power to capture Pan's shadow when Neal and Hook get in a cat fight over a lighter and Regina and Rumple sit around waiting. 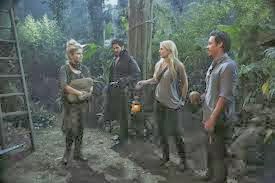 Belief in love was the theme of the episode. Snow is angry because David didn't believe in their love enough to trust her with his injury and the knowledge of the cure. Belle and Rumple's belief in love leads them both to hope, courage, and the opportunity to defeat Pan once and for all. Ariel's belief in her love for Eric drives her to go to Storybrooke. Henry's belief in his family's love makes him the biggest challenge Pan has faced, but also drives him to swallow Pan's lies about Wendy. Hook's belief that he will earn Emma's love is driving him to be more noble and more petty and Emma's belief in Henry is pushing her forward in her quest and in her strength. She also proves what I said last week in that it is her love that powers her magic, not her anger. She was annoyed, but Emma cares deeply about both Hook and Neal and getting the shadow to save Henry, and that is what allows her to light the candle. And Michael and John are driven by their belief that they can save their sister.

From the minute Michael and John started talking their British accents were nagging at me and the glasses - I did get who they were before it was revealed, but just barely. I got really excited though. I really do like the way this show takes all of these things we "know" and turns them on their head and twists them around.

As soon as Pan told Felix not to let Henry see where he was going, I knew it was a set up. Henry can be so insightful at times, but at others, his "true believers heart" blinds him to the truth, which is why Wendy was the perfect tool. When Pan says that to save magic will require courage he fails to leave out the whole Henry has to die thing - which became clear in the preview for next week.

This was one of those episodes where I just wanted to smack Snow. Really hard. I understand why she is upset, but she needs to get over it. They're yelling fight came none too soon. They're adorable as a couple, but Snow gets on my nerves sometimes.

Belle's jacket was particularly adorable this episode - and my question from last week was answered: Belle does call him Rumple.

My favorite lines of the episode were tied between Doc Hopper and Leroy's exchange and Hook and Neal's:

Leroy: Can we panic now?
Dr. Hopper: Yeah. Sure. Maybe. Just a little.

Neal: You came to Neverland on a pirate ship through a portal, but you draw the line at a magic coconut?
Hook: Fair enough.

I was really hoping that no one in Storybrooke ended up injured by that flying manhole cover!

And next week it looks like things are finally coming to a head. I love Neverland and Pan, but I would like to see more of the other characters. I miss the Storybrooke crew.
What did you think about this week's episode?
Posted by Rebecca T. at 12:39 AM