3.19 "A Curious Thing"
(any ideas why this is the title? All I could think was "love is a curious thing" but it just seemed an odd title) 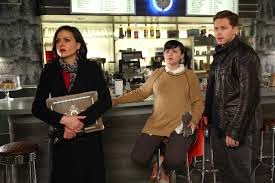 Tonight the zingers just kept coming as our intrepid fairy tale cast searches for a way to destroy Zelena - or at least break the memory curse. Regina and Robin do some lip locking while Henry finally gets completely fed up with the lies he's been fed and Hook tries to avoid Emma and still save Henry. In flashbacks to the missing year we finally get to see how they ended up back in Storeybrooke, watch Philip and Aurora get turned into monkeys (seriously?), and go see Glinda who looks like she's been trapped in Narnia with the White Witch.

At one point NaomiRuth asked if the writer's were high while writing some of this dialogue. Her other comment was that the dialogue must be an effort to make up for the continued presence of Zelena.

I will say that I find Zelena marginally palatable when she is just being and doing evil. As soon as she starts elaborately plotting and pontificating I want to push her off a very tall balcony. Repeatedly.

I was very happy to finally get some real action out of Henry. Though he was still a bit too passive for my taste. I was glad that the book was the key. I've been calling that since they returned to Storeybrooke. But I would have preferred for Henry to have found it and remembered on his own. Ah well. His memories are back and he can finally be a real part of everything again.

The flashback was enjoyable as well, though there are still so many questions I have about that missing year. And I'm really afraid we're not going to get many more answers to anything now that the bigger picture stuff has been covered. There is SO much character development that could have happened and I want to see it! 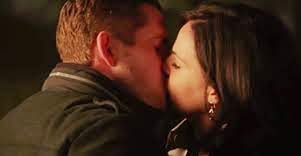 Seeing Regina and Robin finally together was great. Regina is absolutely adorable in the flush of new love - something she hasn't had since her first love was killed by Cora so long ago.

On a side note: My one major complaint was the hideousness of the castle CGI. Seriously. Did they just blow their budget on the Rumple/Neal transformation? (Because that was pretty cool). But the castle green screen was so painful I could barely watch it.

When Emma was yelling at Henry (and for most of their conversations since returning to Storeybrooke) all I've been able to think about is Henry and Emma's pact that she would never lie to him again. And then that's all she does. 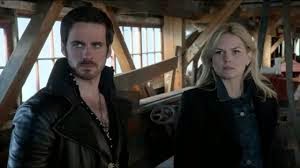 And I would just like to point out that unless they get the curse reversed or lifted or whatever Emma and Killian can never ever kiss. This is tragic. Especially now that Neal is gone.

Also, Neal being the one to save the day made me so very happy.

One question that we had was about the flying monkeys. First, is that really the end of Aurora and Philip's story? I mean, I don't really care much about them, but what a crummy ending. And also, if you shoot/kill a flying monkey are you killing the person? So in the battle did they just kill Aurora and Philip? More explanation on this is needed.

Overall, this was a great episode ramping things up for the finale. I'm really curious to see where they are going to leave the season. I don't know for sure, but it does look like the show has been renewed for season 4 (and I just found an article that Michael Socha is slated to come onto Once Upon a Time since Once Upon a Time in Wonderland was canceled. I only saw a couple of episodes of the spin-off before I just lost interest/ran out of time/had too many shows playing at the same time, but he was the highlight for me, so I hope that this rumor is true! We need another strong male character after the loss of Neal.

And now I offer my favorite zingers, quips, and quotes from tonight's episode:

Regina: "To be fair, the first time I was threatening you. Everyone else just became collateral damage."
Grumpy: "Remind me again why we forgave her?"
Regina: "Because I'm helping!"

Regina: "What are you even still doing here?"
Robin: "What I'm doing here is saving your ass."
(Seriously Robin, just pull her pigtails and be done with it)

Regina: "I don't have time to wait for the handless wonder."

Robin: "Where I come from a simple thank you would suffice."
Regina: "Where you come from people bathe in the river and use pinecones for money."
(we actually had to pause it after this line because we were laughing SO hard we couldn't hear anything else that was going on)

Snow: "Because after true love there is no more powerful magic than footwear. It has to be protected."

Excited about next week's episode, though the preview seemed awfully spoilery as in giving away the ending? What do you think?
Posted by Rebecca T. at 11:31 PM