Fairy Interesting: OUAT - It's Not Easy Being Green

So while the rest of the world is tuning in to Game of Thrones, I am settling in to watch Once Upon a Time to find out what sort of dismemberment they have planned to rid Storeybrooke of the plague that is Zelena *cough* I mean, to find out how the showdown between Zelena and Regina will play out. Also, seriously? Zelena and Regina? For real? Read their names out loud if you still don't get what I mean. 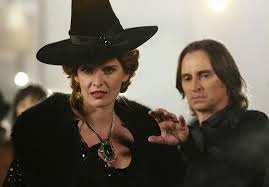 There is a bit more snark in this week's write-up. I'm afraid Zelena is a bad influence on me.

Sadly Zelena survived the episode with limbs and life intact. And now we've received enough backstory to completely dislike her and remove any remaining vestiges of hope that she might possibly be any kind of nuanced character that might possibly be kind of interesting (not that I had much to begin with). We also see Belle trying desperately to reach Rumple and Rumple fighting to be with her while Regina flirts with Robin Hood and Hook takes Henry on a trip down memory lane. 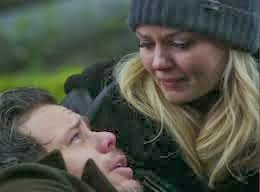 I believe even more strongly that Neal's death was one of the most pointless things on the series to date, but it does seem to have snapped Hook out of his funk, so there is one good side to that plot twist. However, if they kill Hook off as was sort of possibly alluded to in the "next week" clip then I am going to have a really hard time staying invested in the show.

I really feel like this season has been the "kill of characters for shock value" season for many tv shows. I don't have a problem with a character dying for a purpose. It happens. It's shocking and it's sad, but if there is good reason (as with most deaths on The Walking Dead and even the recent death on Teen Wolf to name a couple) I will deal with it. But when it's kind of like - hey, we want to draw ratings, so let's jeopardize main characters and then kill one off - then I have a bone to pick. I guess we'll see how things play out with Neal out of the picture.

As for Zelena's backstory I don't think any of us were shocked to find out that her reprehensible behavior stems from mommy and daddy issues (wow, what an original plot device...). However, it has become clear that she is a bitter, wicked, unredeemable character whose time should be drawing to a close soon. 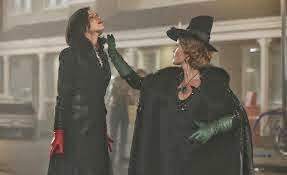 For all my whining about Regina's wishy-washy-ness last season, looking back I can see the way that they crafted her character to be so much more complex than simply the evil queen. Was it always handled as well as it could have been? No, but I never hated Regina with the simple loathing I feel toward Zelena - and this is not in any way the "love to hate" kind of hate either.

Anyhoo. Zelena hates Regina, she hates Rumple, she hates love, she hates her adoptive father, she hates Oz... does that about cover it? I did appreciate the fact that they made the slippers silver, staying true to the original story. But weren't the shoes that the Hatter brought Rumple ruby? However, I was a little surprised that Emma's almost-fiance monkey boy was actually the great and powerful Oz. Probably should have seen that coming, but I didn't.

The tag line for the episode "No dear; it's the wicked west." Is probably one of the worst lines of dialogue I've ever heard on this show. And the actual showdown was basically non-existent. We do however know now that Zelena was in fact after a heart. So whose brain does she want?

Also, Rumple's training of Zelena with the blind fold was like some sort of strange reverse Obi Wan Kenobi where she was being asked to embrace her hate rather than fight it.

I do have another question about Rumple now, though, in who his caretaker was and who else might have grown up with him. I have a weird feeling we may come back to that at some point.

Please do not tell me that Rumple is Zelena's father. I had this thought during the episode and I'm pretty sure it made me throw up a little.

But speaking of hook-ups, there was some adorable flirty-flirting going on between Regina and Robin this episode and, as has become Regina's wont, she claims my favorite line when she tells Tinker Bell, "Right now I have better things to do than to gossip about boys." 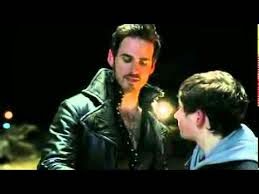 Gillian's talk with Henry about Neal was adorable. I want Henry to remember, but I do like that he is basically the same person, even without the memories. But it's so hard to have him even further outside of all of the happenings. It was bad enough when he was in the know but kept out. Now he's completely clueless and I can just see that coming back to bite Emma later.

I definitely want to know what happens, but I'm really scared that we'll be stuck with Zelena into next season. That would definitely turn this into a tragedy.

What are your feelings on this episode? Do you like what Zelena's character brings to the show and if so, what is it that makes you feel this way? I am honestly curious as to whether everyone shares my frustration (as most of my non-web friends do) or if there are people who like the character.
Posted by Rebecca T. at 1:14 AM

Zalena reminds me of how people felt about Paulo and Nikki from Lost.