Tonight we learn a little bit about Hook's missing year as he struggles to deal with his feelings for Emma. Regina and Emma have a magic lesson, and David tries to convince Henry that he is a cool grandfather.

I really enjoyed most of this episode, but I find myself without a lot to say.

Regina has definitely become one of my favorite characters. I feel like the actress and the writers have finally settled in with who she is and the chemistry is finally working right.

I did notice a heavy theme of black, white, and red in the colors throughout the episode. I'm not really sure of the significance (other than the traditional Snow White story connection), but it does stand in pretty stark contrast to the green of Zelena.

One thing I found odd was how confused everyone was that Hook talked about the Jolly Roger as a woman. From pretty much any book or movie or tv show that has sailors or pirates usually has said sailors or pirates referring to their ship as female. Guys do that with cars too. And a lot of captains in sci-fi shows refer to their starships that way. So I wasn't understanding the confusion. Of course, the derision from Ariel made sense in the story line, but Smee? He should have gotten it.

Zelena seriously invokes a gag reflex every time she's on screen now. If it wasn't for the fact that I wanted to know what weird thing she had cooked up with Hook I would have fast-forwarded through that screen. I hate her. And I want her dead already. Ahem. 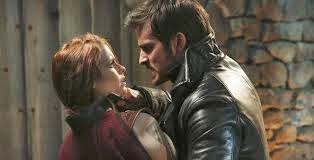 I also don't understand how she could claim that Hook's oath was selfish self-preservation. He was putting aside his pride in confessing, and admitting that love was the most important thing to him - that true love was now driving his actions. This should not have been something that would allow her to place the kind of curse she describes for the reasons she describes. It just didn't make any sense to me at all. It felt very contrived (as much of the wicked witch story line has).

I do like the fall out possibilities of him not being able to kiss Emma, but there had to be a better way to come to that.

Perhaps I'm being picky, but this second half of the season, and even some of the first half of the season, has felt more like the writers or producers came up with ideas of characters they wanted to introduce and really big picture events, and then just started hooking them together in any way they could to get from point A to point B without it having to make sense. (Example - massive build up in the mystery around Pan's shadow which evaporates when Tink can suddenly just trap and burn him with virtually no effort).

I did enjoy Regina's lesson with Emma and think she's hit on the only way to really get Emma to realize her full magical potential. I hope we get to see a little bit more of this rather than having Emma suddenly just brilliant at magic.

Curious to see what Hook does now that he knows of this curse. He's trapped in a bit of a Catch-22. If he saves her life he puts everyone she loves at risk. If he kisses her, then he's doomed everyone anyway, because Emma is the only one who can stop Zelena.

So where will it all fall? We shall have to wait and see. And hope that Zelena gets as little screen time next week as she did this week.
Posted by Rebecca T. at 10:00 PM