Once Upon a Time - Siege Perilous 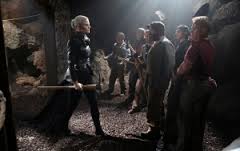 In tonight's episode, the dwarfs get sassy, Belle finally gets a little more screen time, and David has an identity crisis while Dark Emma tries to have lunch with Hook. In flashback Camelot we learn that Arthur is as sneaky as I've been suspecting and that, once again, because their memories have been wiped we can have the same story line take place twice without the characters knowing it, which makes for some amazingly dull television.

Now normally I would be all over a David-centric episode. I love David Charming! I like that he's struggling with feeling useless and helpless. But the story line was not particularly inspiring. He goes on a quest. He fails. He is tricked by Arthur. He gets to sit at the Round Table. Whoop.

Also, as he was fighting the knights on the bridge, this is all I could think about:

I have been suspicious of Arthur since we first met him. He has a very smirky face and I just didn't trust him. At all. But I put my suspicions aside because so much other stuff was going on. But I was right. I just don't know if he's really acting for the best of his people or if he has some sort of ulterior motive. I was willing to give him the benefit of the doubt until he made his man POISON himself. Because that's something normal people ask their most loyal servants to do.


But YAY! Lancelot. I forgot about him and I liked him. 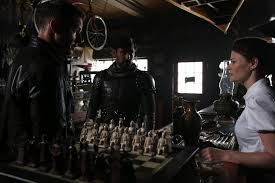 Let's see - oh, I would totally pay to see an all female tournament on this show. That would be awesomesauce.

I really do love that Belle has had more screen time. Here's hoping she continues to play a bigger role.

Dark Emma is not doing it for me. I was excited to see her get to play the sinister side, but it's not coming across sinister so much as, um, how to say this tactfully - bad acting. I don't know. It's just not working. It's too dead and almost old Emma, but not, but not really evil feeling. Just blah.

However, I am very excited to see Gold back in two different roles. Excited to see how, and if he can be, crafted into a hero. That seems like an awfully risky, long, and complicated plan. But most villains choose plans that are like that, so I guess Emma has learned one of the great villain trademarks.

And why no Henry? *sigh*