If you haven't read Honor Among Orcs you should go check out my review and interview, and then read the book and then read this book because this series is awesomesauce.
Arianna escaped the horrors of her father's house and survived the treacherous journey over the mountain and all of the dangers she faced with the orcs and elves who wanted to kill or control her. But her new husband, Bolthorn, is now worried about his missing brother and Arianna feels completely inadequate for the responsibilities that will fall on her shoulders as Gythja - leader with her husband of the Hrimthursar clan. Add to that the new powers she doesn't quite understand and a baby on the way and Arianna is facing a lot of uncertainty. Can she and Bolthorn rescue his brother and cousin without losing themselves in the process? And can Arianna face her past and break free of the hold her father still has on her?

This book is available today so go buy it!
Check out more about Amalia at her blog or on GoodReads, follow her on Twitter, or like her page on Facebook.
You can also check out our other posts related to Amalia's books.

Now check out the 10 things I loved about Blood of the Queen. I've avoided spoilers of this book, but it is a sequel, so if you haven't read the first book, just be aware I'll most likely be spoiling that one to some extent :) 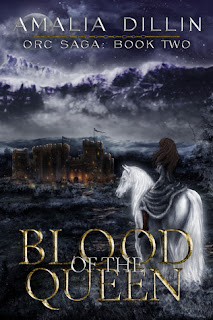 Update: I forgot to mention that I received an advance copy of this book in exchange for a fair and honest review. That had no bearing on my review - I really loved it this much :)
Posted by Rebecca T. at 8:00 AM

Thank you so much! (Normally I do not respond to reviews in comments but I just wanted to reassure you that there DEFINITELY will be a book three!!) :D

Yes, yes, Yyyeeesssss!!! I agree with all points! Isolfur! I couldn't tell if I wanted to kiss him or kill him and I went back and forth several times! Eagerly awaiting book 3! ♡♡♡