Once Upon a Time - Dreamcatcher

What an episode this week! We finally find out who Merlin is and there's plenty of action both in the present and in the flashbacks to move the story well forward. Emma Dark Swan manipulates Merida who begins to manipulate Rumple into being a hero. The crew of heroes sets out to try to uncover Emma's evil plan and Henry tries to win the approval of the lovely Violet. While in the flashback Emma manipulates Violet to manipulate Henry so his tear can set Merlin free.

It seems that the one thing the darkness does is latch onto the part of someone that feels powerless and offers them an easy fix, a quick way to save themselves and the people they love. This blinds people like Rumple and Emma to the truth that true power is in light and love, not in magic and deception. The question will be whether Emma's conflicting roles as Savior and Dark One will allow her to fight back against the darkness that's overtaken her. In the flashbacks she has fought against it, but she's also fallen back on the false power of the dark magic every time things get a little hard. She excuses it because she's doing it for "good" reasons, but relying on power and magic rather than truth and inner strength will always cause unintended fallout. 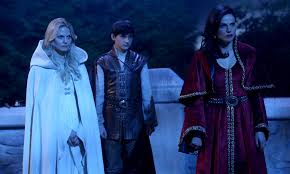 Regina's reminder at the end of the episode was pointed - the ends do not and cannot justify the means. Just as Cora killed Daniel because she thought it was the best thing for Regina, so too Emma has started hurting people and justifying it by her good intentions and the end result she hopes to achieve. She might not be Regina, or Rumple for that matter, but she's falling into the same traps - the choice of power over the vulnerability that comes with true love.

Though, I must admit that my first reaction when Emma told Regina, no offense but I'm not you, was that she was right - Regina has better fashion sense, more flair, and much better snark.

Sidenote: how much did I love Regina's outfit in the flashbacks?

Another question raised tonight is who the Dark One was that Merlin faced and who his lost love was. Merlin isn't exactly what I was expecting and I'm really curious as to what happened to him between the release and the return to Storeybrooke. I'm also really wondering what happened that made Emma so angry at everyone and why she thought bringing them all back to Storybrooke was the answer.

I really liked the way the magic was both light and dark when Emma set Merlin free - her two natures fighting together. So what tipped things to the dark?

And of course, the main conceit of this episode - the dreamcatchers. I love the call back to Neal, of course, but also the idea that these can catch, not only dreams, but memories. And that makes Emma's shed of dreamcatchers extremely creepy. As well as raising questions as to why she's so upset when she goes in there. She's very ... gloomy as the Dark One. Seeing her smile with Henry was nice and, honestly, much more creepy than when she's Eeyore-ing it up everywhere. Maybe it's because she's having to fight against her role as Savior and her unfinished Operation. Mongoose

I'm so frustrated with Arthur's continued deception in Storybrooke. Gah! They need to find out the truth!

The Peter, Peter, Pumpkin Eater got a good chuckle out of me. 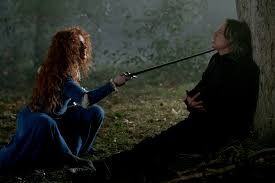 Oh, and another question - how did Merida get into Regina's office or, for that matter, know to look in Regina's office for the book. She seems to know an awful lot about Storybrooke (like where to look for Rumple's treasured possessions). Where did she get this knowledge? I suppose Emma could have given her a quick lesson, but it all seems a little too convenient.

Another question I had was about the protection spell on Emma's house. If it was just the door handle that was protected, couldn't they have just gone through a window or something? It seems like a pretty weak spell that can be beaten by a scarf. Regina would have set a much more effective protection spell if she didn't want people getting into her house.

I loved Violet's reaction to the soda: "It's like a carnival in a can!" But I was a little bit annoyed at the completely different reaction her father had. Though I do guess that, since he doesn't remember what happened before, he's forming an entirely new impression of Henry. Though I kind of liked the idea that she wasn't as into him as he was into her - it seemed a little less cliche. But the twist of Emma having coerced her into it? Very interesting. And, really, much more Once Upon a Time-ish.

Some really good character and plot development tonight. I'm really curious to see where the Merida storyline goes and to find out what else happened in Camelot to tip Emma over the edge.
Posted by Rebecca T. at 9:34 PM