Once Upon a Time - The Price 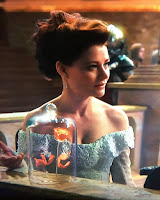 Tonight's episode did a good job of moving the story along and opening up many of the mysteries to be solved this season. Emma "The Dark One" Swan swoops around being cryptic and then revealing just enough to keep everyone confused while Regina tries to step up and become the savior Storybrooke needs to survive. The dwarfs jump into the fray with some decent action and an evil spirit tries to suck out Robin Hood's soul while the Camelot transfers settle into their new home in the 21st century. Meanwhile in Camelot flashbacks Regina takes dancing lessons from Charming and wardrobe advice from Snow, proving she really has changed and Emma tries to "conceal, don't feel, put on a show" because "one wrong move and everyone will know" she's the Dark One.

I know that Regina was only trying to protect Emma and keep things on track, but I really have to wonder if denying Emma the chance to embrace her role as the savior ended up causing her to embrace her darkness. What would have happened if she'd acted as the savior? How would that have affected her magic.

Also, concerning the magic - I guess as the Dark One, she can only use "dark" magic? Because the glowy thing she did to Robin certainly looked more light than dark. You'd think that the purpose of the magic would affect the effect of using the magic. *sigh*

I thought it was an interesting point that Emma knows everyone's weaknesses and strengths and so, therefore, would be an even more dangerous and formidable opponent. She's fought alongside them, so she knows exactly where they are most vulnerable. It's a good thing they've had so many issues to deal with and have started to learn how to stand against any kind of evil.

Something I was thinking about when they all linked hands with Regina to repel the demon - every single time someone goes off and tries to solve a problem alone, everything gets worse. Exponentially worse. It isn't until they work together that they're able to prevail. And it seems like this message is finally getting through to them. It was so great in both Camelot and in Storybrooke to see people supporting and believing in Regina. It's amazing how things have changed. And just because Regina isn't THE savior from her own curse, it doesn't mean she can't be A savior and she's made some good strides in that direction. I like this role reversal thing.

And this week's Dark Swan was definitely more entertaining and creepy than last week's dead fish Dark Swan. Some really great moments - especially with her and Killian - where the smiley, creepy, off thing worked out nicely. And some moments where I was rolling my eyes. She doesn't seem to quite have settled into her role yet for me.

I was trying to figure out Killian's plan and then felt utterly stupid for not realizing he was going for True Love's Kiss. I think Belle made a really significant point when she said "A curse isn't a curse when the person wants it."
It's so true. Rumple, when he was in love with his power over all else, couldn't be saved. As long as Emma sees herself as the Dark One rather than as the Savior she can't be saved. Like Snow said, if they win, Emma loses. Emma has to want to change, even a little bit. It will be interesting to see what else happened at Camelot to bring things to where they are now.

In regards to the "price" for Robin - Emma doesn't tell Regina that something might be required or that Regina would be the one responsible for the price, so it certainly doesn't seem fair to blame Regina for using magic without paying the price. Emma accuses Regina of always blaming someone else and it's often true. Even in this episode Regina berates the unconscious Rumple for "making" her the way she is. But no one forced Regina to make the choices she did. But Emma isn't any better. She's blamed a lot of people for things that were her choice. Even now she's blaming Regina and the rest of the town for making her be the Dark One. Taking responsibility for your actions is key to moving forward and moving in the right direction.

A couple of random thoughts:

I'm so happy the dwarfs are bigger parts of the action in this season. But poor poor Dopey :(

Is there some sort of magical Sam's Club on the other side of town? How do they get food. I mean, I wouldn't think that they'd have much luck getting deliveries what with so many curses and people unable to come and go freely and all of the other things that have happened. I've never thought about it, but seeing all those cases of water made me ponder.

How adorable is Henry. I'm so glad he gets some actual life storyline stuff - something other than running around behind people's backs because no one trusts him. How cute is he bragging to Violet about saving everyone. I love it.

That little music montage scene at the dance was the perfect light moment we needed in the middle of all the insanity. And then the music had to get all ominous and someone had to try to kill Regina *sigh*

Super excited to see where all of this leads!

What did you think about the episode? I'd love to know!
Posted by Rebecca T. at 9:51 PM