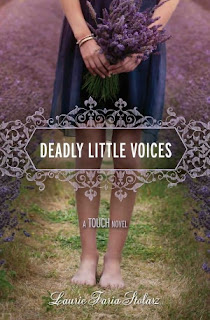 "Deadly Little Voices," is the latest book in Laurie Faria Stolarz' "Touch" series. Teenaged, Camelia Hammond has the unique gift of psychometry.  Instead of traditional psychic visions, Camelia receives visions through her art.  She is a potter and often feels compelled to sculpt objects that are clues alerting her to dangerous situations that have helped her save the lives of classmates, friends, and even herself.  In this fourth installment, Camelia finds her visions taking a darker and scarier turn.  Not only is she feeling the urge to sculpt seemingly random objects, she has also begun to hear voices and has frightening hallucinations.  Are these voices and hallucincations foreshadowing of trouble to come and a crime she can prevent ? Or does Camelia suffer from schizophrenia like her Aunt Alexia? As if that isn't enough to deal with, Camelia also struggles with her feelings towards her ex-boyfriend Ben and her maybe more than a friend Adam.

I love this series, psychometry is a fresh and different take on the usual psychic-crime solving heroine premise. Each book in this series is better than the last and this entry surely is the most intriguing. I don't want to spoil the book by describing the plot too much.  The whole fun of these books is to keep guessing along with Camelia as to what the clues all mean.  If you're looking for an awesome supernatural YA mystery, put your hands of the "Touch" series.  You won't be disappointed.
Posted by Jenn N. at 8:00 AM