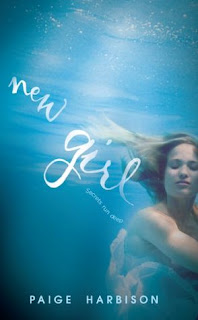 Becca Normandy has been missing since the final day of classes at Manderly Academy in New Hampshire last May.  She was beautiful, funny, charming, and loved by the entire student body.  She was everything the new girl is not, or was she?   The minute the new girl, whose name isn't revealed until the final pages, arrives on campus, she finds herself the victim of gossip and ridicule.  The entire student body wants the new girl to know that they'd much rather have perfect Becca back then this Florida native.  Meanwhile the new girl just wants to go through the motions and get through senior year so she can return to Florida and attend FSU with her friends back home.

This book flip-flops between both the new girl's and Becca's points of view.  The new girl faces harassment from her roommate, Dana, who was Becca's former roommate.   Dana tells the new girl how close she and Becca were.  However, Becca's point of view reveals ulterior motives as does her point of view on all her other classmates who thought she was perfect.  As the months go by, most of the new girl's classmates don't give up on their hope that Becca is alive and will be found soon.  Others begin to believe she may be dead and there certainly are a number of possible suspects.

I couldn't put this book down. It was a little far-fetched that anyones parents would send a girl to boarding school in their senior year of high school but the intense action and mystery sucks you right in and you forget all about a little detail like that.  Where is Becca isn't just the only mystery here, who is/was Becca is also a mystery as well as who is the mysterious new girl.  If you're looking for a great YA mystery then be sure to pick up "New Girl" when it's released on January 31, 2012.

Speical Thanks to Net Galley for providing me with the digital galley.
Posted by Jenn N. at 8:00 AM

Ooh... It intrigues me that you don't know New Girl's name for so long. Sounds interesting.

This sounds a little Private-esque Jenn. I'm definitely going to check it out!