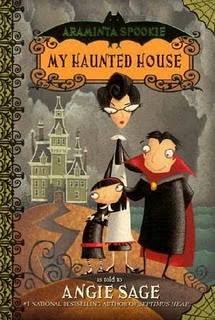 Growing up it took me FOREVER to read. And by FOREVER I of course mean I was reading competently by the time I was seven or eight years old. Since my sister was reading by three, I was highly behind. And since I knew books were awesome it felt like it took me much too long. So once I learned how to read "Go Dogs Go" I skipped right ahead to Box Car Children and beyond, missing chapter books entirely, because chapter books were for babies.
Oh how wrong I was!
Now that I am looking into possibly working with children’s literature as a career, I have started reading chapter books, a section of children’s books I missed out on. And found two of my most favorite series ever. I wish there were more books in the series, because I absolutely love them.
The first series I found was Araminta Spookie by Angie Sage. They are adorable. You may have heard of the author through her middle grade series, Septimus Heap.
Araminta lives in a creepy old mansion with her aunt and uncle. Her aunt is persnickety but lovable and her uncle (who sleeps with bats in his special turret) is kind but bashful. Araminta has a bedroom for every day of the week and absolutely loves her house. When her aunt and uncle try to sell the house Araminta is in shock and tries desperately to frighten away the family that comes to look at it. Of course, her entire plan backfires, causing the family to stay.
I love this series because the voice is absolutely real. Araminta sounds like an eight-year-old girl. She has a lot of run-on sentences, and thinks in faulty logic. She’s not a perfect heroine, being jealous at times, and breaks the rules she should probably be keeping, but she learns more about herself and grows as a person through the series. 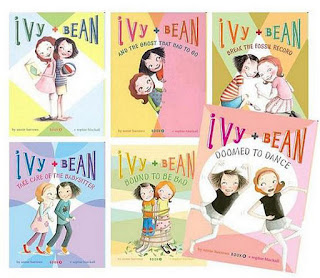 The second series is Ivy & Bean by Annie Barrows. Annie Barrows also wrote a middle grade book, "Half Magic," but is probably most known for her work with Marry Ann Shaffer in the "Guernsey Literary and Potato Peel Pie Society." I found the Ivy & Bean books in the bargain section while working at Borders and I absolutely loved them.
Bean (short for Beatrice) watches the new girl move in and decides she doesn’t like her. Why? Because that’s what little kids do. I know I did. The new girl is Ivy and she decides she doesn’t like Bean either. But – of course – by the end of the first book they realize they can be perfect friends and learn to get over the First Impression Syndrome.
This series also is written in a believable dialect. I love that Ivy & Bean have a great imagination and are silly and play games and get in trouble and learn how to grow up just a little bit.
What impressed me with both series is that there are strong relationships between the children and their parents (or parental figures). When they disobey their parents they get appropriately punished instead of simply being forgiven like I have seen with some series that bother me to no end. I love that both Bean and Araminta are rambunctious and a little bit crazy pants. And I love that the books are not preachy, but the children in the stories still learn lessons, just in an organic, natural way. And I loved that I, as an older child-at-heart, could still enjoy these books. Neither Annie nor Angie talk down to their audience ever, not once, but assumes that the children reading their books will be smart and capable of understanding what is going on. Because kids are smart and are capable of understanding what is going on.
I think these books are fabulous and people of all ages can enjoy them.
Posted by Unknown at 11:48 AM