I've always been fascinated with fairy tales. I love reading different versions of them and if you tell me that a book is based on a fairy tale I'll grab and read it in a heartbeat! So I thought it would be fun to do a series of posts looking at different retellings and versions of different tales. This month it's Little Red Riding Hood! 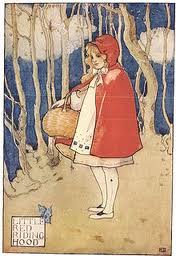 Everyone knows this story, right? An adorable little girl in a red hooded cape takes goodies to Grandma's house. In the woods she meets The Big Bad Wolf who tricks her into divulging her mission. He hurries off and manages to beat Red Riding to Granny's, eats the grandmother, and gets into her bed. When Red Riding arrives she is momentarily fooled by the wolf until she notices that Grandma's eyes and ears and canines have gotten abnormally large. And while glands might swell when your sick, your teeth don't normally change. So the wolf attacks the girl who, of course, screams bloody murder so a friendly neighborhood woodcutter comes to her rescue.

Yeah, you didn't see that last one coming, did you? 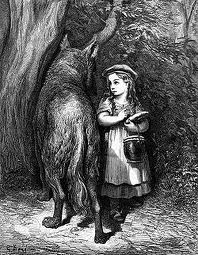 The story has been told for a very long time, but one of the first recorded versions is by Charles Perrault based on 17th century French tales. In his version both Red and Grandma die and it wraps up with a moral, warning that "Children, especially attractive, well bred young ladies, should never talk to strangers, for if they should do so, they may well provide dinner for a wolf. I say 'wolf,' but there are various kinds of wolves. There are also those who are charming, quiet, polite, unassuming, complacent, and sweet, who pursue young women at home and in the streets. And unfortunately, it is these gentle wolves who are the most dangerous ones of all." SOURCE (This is a great source if you want to read some of the different variations. You can also read Perrault's version in the French if you like!) 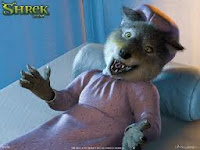 This is the main moral attached to the story that has carried on through the years: don't talk to strangers. Because there's no better way to keep your little kids away from strangers than by telling them that their grandmother will be eaten by a wolf if they don't.


Of course, these are only the tip of the iceberg when it comes to retellings of the story over the years. 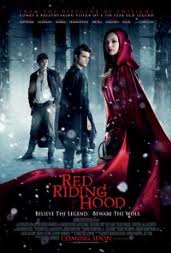 One of the most recent adaptations was the young adult book by Sarah Blakley-Cartwright and David Leslie Johnson, which was then adapted for the big screen.
This book returned the fairy tale to some of it's older roots with the wolf as a werewolf/shapeshifter and had some interesting twists and turns to keep you guessing. 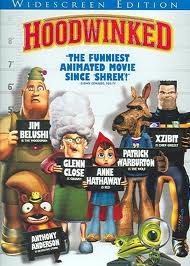 Or maybe you have a little quirkier taste and you prefer the multiple point of view unraveling of Hoodwinked! One of my family's favorite takes on the tale.

If you are interested in the history, you might like Sandra L. Beckett's Red Riding Hood for All Ages: A Fairy-tale Icon in Cross-cultural Contexts. The English Major in me is ALL over that one!

And of course, there are about four billion picture book versions for you to choose from if you want to share one of the simpler tellings with a child in your life, or the child inside :) Such as Honestly, Red Riding Hood was Rotten!; The Story of Little Red Riding Hood as Told by the Wolf by Trisha Speed Shaskan and Gerald Guerlais.

Jackson Pearce recently released Sisters Red, another twist with werewolves and magic and the choices sisters make. Neal Schusterman's Red Rider's Hood presents Red as a teen boy who ends up joining the Wolves gang to get revenge on the death of his grandmother. Ooh! Fascinating!

And, for those of you old enough to remember the old Rocky and Bullwinkle show, I leave you with one of the Fractured Fairy Tale versions!

What's your favorite Red Riding Hood take? Any I forgot? Please share in the comments!
Posted by Rebecca T. at 7:00 AM

I have to say how much I love that you added a picture of the wolf from Shrek :)

I love retold Fairy Tales. This is awesome.