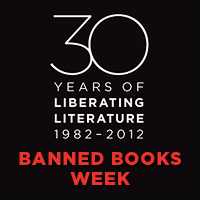 I didn't know such a week existed until just a few days ago. Here's a list of books that I have read that have all been banned or challenged within the last 100 years. I have deliberately omitted the reasons for the bannings. I think it has a little more impact this way. I have read several of the books on this list more than once. I can't imagine how different my life paradigm would be if I had not read some of them (well, I probably could have been alright without experiencing any of the Captain Underpants series).


Bible (collected works of numerous writers - inspired by the creator of, well, everything)


The Call of the Wild (Jack London)


Of Mice and Men (John Steinbeck)


The Pillars of the Earth (Ken Follett)


To Kill a Mockingbird (Harper Lee)


A Time to Kill (John Grisham)


I'm not saying I liked all of these books. In addition to Captain Underpants (which I read for my son when he was wee), a few of them were painstaking to read. Moby Dick is an outstandingly great, epic story, but I couldn't stand reading it. The Scarlet Letter addresses significant cultural themes, but left me unmoved. I've read other works by John Steinbeck, but I didn't particularly care for Of Mice and Men. Although most literarians (did I just invent a word?) will say that Huck Finn's story is a much more important work that Tom Sawyer's, I've always preferred the pace and prose of the latter. When I was thirteen, I read Dracula for the first time. Once I realized that it was written as a series of letters and journal entries, and was able to wrap my mind around that concept, I loved it.

But perhaps you've read a few of the books on this list. Now just imagine if you had never been allowed to read it.

Now imagine that the book had never been published. How would that have impacted the world that you know? Let's see...

Would there be vampire movies without Dracula? What if there were no Narnia, or Middle Earth? What if poor Anne Frank's diary had never been found? No Tom, no Huck, no Buck, no Atticus Finch. No big nasty mindless killing machine that only swims, and eats, and makes baby sharks, and no "ye whale, ye damned, damned whale." No Jean Valjean, and no Sherlock Freaking Holmes, for crying out loud! Just think, without Sherlock Holmes, and without Van Helsing's pursuit of Dracula, the great actors Basil Rathbone and Peter Cushing might have ended up parking cars. We might not even know who Bela Lugosi was. "The children of the night. What music they make." No, "call me Ishmael."

The wonderful, wonderful thing about living in a free society is that we have choices to make. We can choose to introduce ourselves to experiences that might otherwise be available. Because of this freedom of choice that we have, we must also be willing to accept the consequences of our choices. If you decide to read something that you later think was a bad idea, or that angered you, well, okay. That happens sometimes. But that doesn't mean you should prevent others from making that same choice. At least not if they're adults, or at least "age appropriate" children.

You learn these things in life. Like Bill Cosby once said, "if you eat some shrimp, and your face blows up, then you don't eat shrimp again."

Celebrate Banned Book week. Go read something someone else doesn't like.

Originally posted as You're not allowed

After posting the above on my personal blog, I received the following comment from one of my avid readers.

"I'd like to know who banned some of these titles. I can figure out some of them. i.e. Harry Potter, because of the witchcraft, the Bible, because someone might lose their freedom "from" religion. But I can't imagine who would ban The Diary of a Young Girl except neo-nazis or holocaust deniers. Cujo is a rare Steven King book that does not have any supernatural forces in the plot. It's just a rabid dog. Who could object to that? Misery, like Cujo, is all about human experience with no witches, aliens or shape-shifting clown-arachnoids. It's a little violent but history books are full of death and destruction."

To which I replied.

"The following reasons are given for the bannings of the books listed below. Sources are from the Wamego High School's Library Media Center http://www.usd320.com/whs/lmc/bbooks.html, which I found through Good Reads http://www.goodreads.com.

Some of this is apparently based on the age group of targeted readers, and others most likely reflect the culture of the times. But most of them appear to be the result of political busybodying.


Alan Andrews
Basso for Hire
Posted by Unknown at 10:27 AM