Tonight in Storybrooke, David Charming gets a little pushy as the stand-in sherriff, Dr. Whale's hair has more character than he does, and Regina shows an emotion other than disdain as she fights for the love she knew long ago.

In flashback Fairy World Rumplestiltskin pushes a younger Regina along her path of vengeance, pairing up with the delightfully Mad Hatter and "the doctor" (who really doesn't deserve to wear that moniker ;) as he tries to find a way to a realm with no magic.

And in Alterna Fairy World the intrepid female four return to camp to find Hook the lone "survivor" of Cora's wrath. Fortunately, Emma's stupid pills have worn off and she manages to wrangle the truth out of him only to discover that what they need is at the top of a bean stalk.

Here's the Once Upon a Time I know and love! Tonight's episode was fantastic. I thought it had a nice balance between the different story lines and started to pull all the threads toward each other.

Regina. Hm. I don't think I like this idea that she's evil mainly because of Rumplestiltskin. I just feel like her character was developed to be so evil and twisted in the first season, that I'm not ready to point it all to this one cause.

Though I do have to say that I adored her pleading with David Charming and her heartbroken realization that Daniel really was a monster. I get that a lot of her anger and resentment feeds back to Daniel's death. I really do. I just think there is still way more going on with her story. She banished a lot of people and destroyed a lot of lives through her spell bringing everyone to Storybrooke and I don't think the mayorship or watching Snow as a school teacher fits into this very narrow revenge focus that is being presented here. 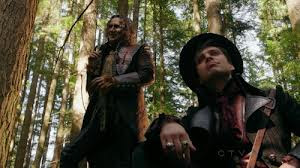 SQUEE! Jefferson is probably my absolutely favorite character. I was talking with Eileen today and said how much I hoped his story wasn't over. So how delighted was I that he featured so prominently in tonight's episode. His creepy smile when Regina agrees was spot on.

And as an aside. I know that the beginning of the first season was a little heavy on Lost references, so I was glad they dropped them, but I totally had to snrk when Rumple said "Dead is Dead."

So apparently Oz is another realm. I adore this idea that it isn't just Fairy World and Storybrooke. I love the fact that there are all of these other realms around - Wonderland, Neverland, Frankenstein's realm, etc.

I appreciated the fact that the nod to Dorothy's slippers was so subtly dropped in.

I realize that his name is Dr. Whale (or Victor), but I will always think Creepy Uncle John every time I see him and I think that makes Dr. Whale even creepier and wrong for me.

I loved Hook and Emma's exchange: "I can count the men who have done that on one hand."
"Is that supposed to be funny?"

Also. Whoa. Rumple is way more powerful than he lets on. To just wave his hand and reappear Whale's arm? He has been practicing a whole lot while Belle's at the library.

But I was kind of hoping they would go somewhere else than to Frankenstein's monster. I was kind of hoping it wasn't the really obvious answer. And how did Victor end up getting sucked from his world into Storybrooke? For that matter, how did Hook get sucked out of Neverland?

I really think Jefferson needs to fix his hat or build a new one. With some magic in Storybrooke he should be able to do this, right?

I'm really looking forward to getting more about Emma's background next week. So what did you think? Will Henry ever hear from the horse that he's ready? Who is walking around without a heart?!
Posted by Rebecca T. at 11:31 PM