September Book Club: My Life as a Furry Red Monster 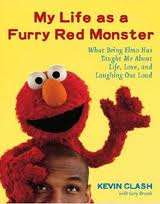 This month we decided to take a detour from fiction and find a memoir. A few of us had read it before and some had seen the recent documentary Being Elmo, so we thought it would be fun to do both. So we read the book and then watched the movie during book club, which was really enjoyable!

We did run into one minor snafu - apparently the book is no longer being published. Thank goodness for libraries, used book dealers and e-books! I don't know why this is out of print, but here's hoping the documentary will spark some interest and bring it back out again.

A cross between a memoir and a "self-help" book, My Life as a Furry Red Monster is Kevin Clash's thoughts on life as Elmo. He shares stories from his childhood and talks about the strange and wonderful journey he took to becoming one of the most recognized children's characters of all time. The book blends humor, inspiration, and biography and makes you stop and think along the way. An interesting and entertaining read sure to make you smile and maybe even tear up once or twice.

Jenn N - I loved the book and the documentary equally. I loved the book's mix of inspiration and autobiography. Kevin did a great job of using his personal experiences to inspire readers while giving insight into his own accomplishments and struggles. The documentary built on it. You could see the joy on Kevin's face as he lives out his dream and felt that if he can do it, you can do it! The documentary also showcased how talented and valuable the cast and crew that brings Sesame Street and the Muppets to life is.

Rebecca T - I thought that the book and documentary complimented each other well. It was really neat seeing some of the places and people described in the book, but they didn't just reiterate the same information. You could enjoy them alone, but I think that the two together provides an even better look at Kevin's story and life. In the documentary someone (I forget who!) commented that Elmo isn't Kevin; instead, Elmo is actually Kevin's parents. And from the stories in the book and the interviews with his parents on the documentary I think I agree. Their encouragement is really what has made Kevin who he is today. And I loved seeing Kevin passing his passion on to the next generation of puppeteers!

Eileen - Both the book and film were great! It was inspiring for me to see where Kevin's message was coming from. What he truly wants the world to learn is clearly portrayed through Elmo, which in my mind is the mark of a true artist. If you have never read a biography before this is a very good place to start.

Grammy T -   I enjoyed the book and the movie. I appreciated how the book was organized by character qualities rather than a chronology of his life. It was an interesting method for presenting Kevin's life story. The documentary added to the book by bring us up-to-date with Kevin passing on his love of puppetry to the next generation. I would highly recommend this book.

Since our next meeting is right around Halloween we thought it would be fun to do something with a bit of a thrill - but not too much as some of us don't like to be scared too badly :) After bouncing around a lot of ideas we decided to go with a Ted Dekker book and after MUCH deliberation settled on Blink of an Eye. Hope to see you next month!
Posted by Rebecca T. at 3:18 PM