The Templeton Twins Have an Idea (which is a book with its own tumbler) was an ARC I picked up at BEA. The main reason why I picked up this ARC is because it was put out by Chronicle Books. Chronicle Books is an awesome publishing company. They put out a lot of non-fiction books as well, such as a gorgeous book The Egyptian Book of the Dead, which was wonderful plates of the Papyrus of Ani. And when I say plates I don't mean dinner plates, but pictures. Beautiful, colorful, pictures of wonderfulness. 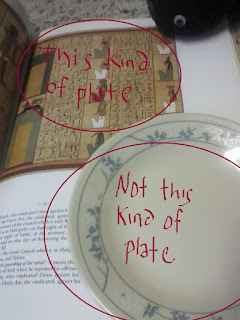 But. That is not the book I am going to talk about today. Today Wombly and I are going to tell you about a book that came out rather recently and it is all about The Templeton Twins Have an Idea. 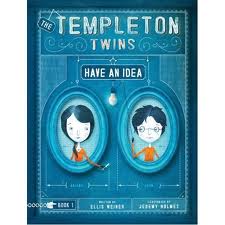 The story is about the Templeton Twins, surprise, surprise, and their father who is an inventor. The story begins:

A) Shortly after the death of the Templeton Twins' mother

B) With the arrival of a VERY TALL, VERY WIDE, iguana

If you guessed B, I am sorry to inform you there is no VERY TALL, VERY WIDE, iguana in this story. There is the sadness of a recently deceased mother, and there is the fact that the Narrator is desperately trying not to write this book. Because of one of these facts (probably the first) their father has become increasingly sad, so their father decides to:

A) Take a new position at a new college, where he will invent new things.

B) Lay down and take a nap.

C) Sell the Templeton Twins to an Arabian with camels.

The answer, of course, has nothing to do with camels, nor with naps.

A) Get abducted by the STRANGE MAN and his brother?

B) Get to eat ice cream until they puke?

C) Get watched over by a ridiculous nanny?

This book was highly amusing and I think it would be enjoyed by Down Unders who enjoyed reading:

A) A Series of Unfortunate Events, by Lemony Snicket

B) The Name of This Book is Secret, by Pseudonymous Bosch

C) Other books that involve interesting inventions, smart Down Unders, and snarky Narrators.

D) All of the Above, Of Course.

Not only is this book a fun read with resourceful twins, it also includes a recipe for meatloaf. So what are you doing? Get up and get yourself a copy at either:

C) An Indie Bookstore near you
Posted by Unknown at 1:04 PM