Fairy Interesting: OUAT - And Straight On 'Til Morning


What a finale! I loved it and I'm so excited about next season!

We start off in flashback world with Hook and young Bae in Neverland where Hook has a change of heart about his greatest enemies' son and reveals a bit more of himself. However, when Bae rejects him, he reverts to the Hook we've known and turns Bae over to the evil Peter Pan.

In present day Rumple has to fight his inclination to kill Henry, save himself, and selfishly hold onto Lacey. Both Regina and Hook get a chance for redemption, the Charmings are the most resilient, adorable family ever, and Tamara and Greg take twisted to a whole other level.

Young Bae was really well cast. I thought that the interchanges between him and Hook were fantastic and I am dying to know how they all got out of Neverland, especially since they reiterated the fact that no one ever leaves. And how much do I love that Peter Pan is some sort of evil, dark force and that they are the "Lost Ones" instead of the "Lost Boys" and how absolutely creepy was it that he's been searching for Henry for so long?! How does that work? I mean, Bae is Henry's father, so how did they have a picture already? What does it mean?

I was actually glad that Greg and Tamara took Henry into another dimension, because this could be the thing that helps them keep Henry on the show - it gives a perfect explanation why he will look considerably older next year, something they were going to have to deal with - though I'm not exactly sure how they will make it work since he goes to Neverland where the boys don't grow up. So we'll see how all that plays out. 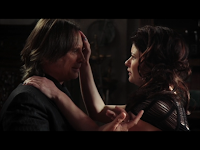 Rumple has become one of my favorite characters again. He was getting on my nerves at the beginning of the season, but his story line has gotten so interesting again. I couldn't believe he was actually fraying that rope and his reaction to Bae's death was heartbreaking. But I found his response - particularly the line that he'd come to peace with his death didn't ring right. It was just too quick of a turnaround for me and he'd barely had two seconds to come to grips with anything. Especially since he was just trying to kill Henry so he wouldn't be his undoing.

I also didn't believe suicide mission Hook, so I was relieved that he hadn't actually been serious. Though I was kind of hitting my head over the fact that Bae had started to feel like a son to him. I thought we had one fairy tale character who was free of the parent/child drama, but apparently not.

Side note: Why is it that when bad guys (and what world is this where Hook is the good guy and Pan is evil?! I love it!) are searching for someone (or something) and don't find it, such as with the Lost Ones and Bae, that the second THE SECOND they leave the other people run right to the hiding place. Wait like five minutes or so to make sure they're actually gone so you don't inadvertently give something away!

But it looks like we'll get plenty of Hook next season, which makes me very happy.

I loved Hook and David Charming together and that David Charming got the snarkiest line of the episode. When everything shook and Hook said, "Time's running out," and David snarked, "Oh, is that what that means?" I cracked up. And speaking of Charming, for a second I thought Tamara had done more than just graze David and I was pretty much ready to jump into my tv, so I was very relieved when he got up and ran after them. And I was glad Hook was there to stop him. Chasing after the insanity twins would only have gotten him killed.

And how excited was I that they finally found a way to bring back the memories?! I was yelling for Rumple to not let her die as Lacey. How adorable was Leroy for making another dose for Belle. And how adorable are Rumple and Belle together! They have to see each other again!

If there was a theme for this episode it had to be redemption. Regina had her moment to change everything and to repay a little bit of the things she had done and she takes it without hesitation. I have been kind of up and down with my feelings toward her this season, but I can't imagine the show without her, so I was so glad they found a way to save her.


Rumple has the chance to redeem himself by saving Henry instead of letting him die. Rather than turning cold at the death of his son, he chooses to restore Belle and protect his grandson. We'll see what happens next season.


Hook has the chance to save himself, as he always chooses, or to do the right thing. And he does, but (of course) it's based on the fact that he cares for Bae, and therefore Bae's family (except Rumple). It was interesting to see this side of him.

Hook's speech to Bae pretty much summed up the theme of this season: "It's not too late to start over. I can change, Bae."

Side note, there were seriously not even enough people in that shop waiting to return to fairyland. What about the blue fairy? And the pink fairy? and ALL THE OTHER PEOPLE IN THE TOWN?! They were just going to leave everyone else to die? It didn't make any sense. I don't even remember seeing Ruby, though I'm sure she was there. But Rumple and Belle weren't? Come on!

And I was excited to see Aurora back again, though less than thrilled for her companions. However... BAE! Woot!

Also, Hook has a crazy arm. Did he really have to throw the bean SO far from the boat? I was kind of worried it was going to close before they made it there!

Such a good finale, so many questions left, but still a sense of ending for the season. So great. I loved it.

What did you think? Do you like where it's going? What do you think next season has in store for us?!
Posted by Rebecca T. at 9:30 AM