Once Upon a Time - Best Laid Plans

There's been a lot of build up during this half of the season about Snow and David's big secret. Tonight we got the pay out for that. It was bad. Really bad. But honestly the previews spoiled half of it. Meanwhile in the present, Regina's thinly played undercover plot goes bad, the author is released, and Emma's trying to deal with the massive betrayal she feels. It's a good thing she's got Killian there.

So in the flashbacks the Charmings seem to be obsessed with wearing fur. It looked weird.

I had a feeling something was up with that peddler (other than that he's Phil from the Dharma Initiative), but didn't see the twist of him being the author. 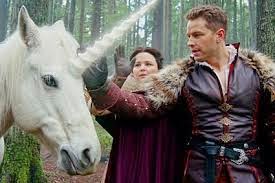 In a move that continues to blur the lines between the heroes and the villains, Snow and Charming harm an innocent child in order to try to protect theirs. Whether it was a dragon or a human, it was still a pretty villainous move. And without making reparations of some sort to Maleficent, that guilt has obviously still hung over them. You can do other good deeds all you want, but it doesn't erase the consequences of the bad choices you made. However, just as making a couple of good choices doesn't erase all of the bad ones, so too making a couple of bad choices doesn't eliminate good ones. It's becoming more and more developed that being a villain is centered in making consistent selfish choices.

I know I'll step on some toes when I say this, but just like Snow and David aren't villains because of this choice (this horrible, giant, evil choice the repercussions of which they are still dealing with), so too Rumple is a villain despite the few good, selfless choices he's made. It's the pattern of the life that matters. And Regina is one example how someone can change the course of their life by changing the choices that they made. 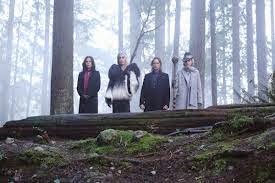 As Rumple was talking to Belle, he said that magic has a cost and that he's so far in debt he can never get out of it. But - BUT he keeps using magic and making choices (not all, people aren't all good/all bad, even here in Storeybrook) in a selfish fashion. No, you're never going to get out of debt if you don't stop spending. And while I believe that Rumple could still redeem himself, he would have to completely change his decision making paradigm and if he wouldn't do it for Belle or for his son, I don't see what else could give him the impetus to do so in the future.

As for Emma and the possibility of "un-savioring" I think that Killian is going to have a huge impact on that, which means he's most definitely going to continue being a target, especially from Gold. I really appreciate the growth in Emma's character and the way she's claiming responsibility for her actions and choices. How much that will matter if and when more magic gets involved we shall see. I liked the way they casually worked in Emma's friend Lily in the earlier conversation because, at least I'm assuming, that this was the very Lily who is Maleficent's daughter. I mean, nothing else would make sense for this show. Though, of course, we don't know how she ended up being separated from her adoptive parents.

Back to Emma - I did have a couple of questions about this, though. If the potential evil all went into Lily, then how does Emma have the potential to go dark? And if they both still have the potential to be evil or good, then what was the point of that spell? And since Emma wasn't raised by David and Snow, then was the whole thing completely pointless?

And can we just have a moment of appreciation for Henry please? He's gotten far too little screen time in my opinion. He knew what to do when the sleeping curse fell, he found the key, he helped keep up the ruse just long enough to get the book back to where it needed to be. I would have liked to see him give David a little bit of sass when David was so rude about the book/key, but I also like that he trusts his grandparents. I'm hoping he gets to play a more active role in coming episodes. (Also, Henry's middle name is Regina's first love?! *cries quietly in the corner*)

I think I was most disappointed in David this episode. He was doing far too good a job of justifying, both in the past and in the present. I'm just glad Snow came to her senses and had two lines that were pretty significant for this episode:
"Heroes do what's right. Not what's easy." It's all about the choices. And, connecting to what I was saying earlier, "None of that matters. What matters is what we did." And that's the difference between a hero and a villain. Not that they don't make bad choices or mistakes. It's that they take responsibility for those actions. No matter what was going on around them, all of the circumstances that led them to do what they did, they are responsible for doing the wrong thing. Hiding it, making excuses, lying - those are the hallmarks of a villain, and I'm glad Snow realized this. Though I have a feeling we won't be so glad that the author has been released.

Speaking of the author, it's really a shame August didn't share some of this knowledge earlier. That was a rather hastily and contrived info dump, which the show is usually pretty good at avoiding. Though I did appreciate the nod to Walt Disney (along with others). Also, it seems to me that the author would need that magic quill in order to actually make things he writes down happen. So I wonder where that quill is?

Next week is Resurrection Sunday, or Easter if you prefer. So no new episode. We're back the second week in April and I'm already trying not to gag at the thought of the return of Zelena. Those episodes seem to bring out the nasty edge of my snark so I apologize ahead of time :)
Posted by Rebecca T. at 10:05 PM