Once Upon a Time - Darkness on the Edge of Town

And we're back! The second half of the season is starting off with a bang. In flashbacks we see Gold do what he does best - exploit other people's strengths and then betray them when it suits his interest. In the present we see Cruella and Ursula inexplicably teaming up with him again. Meanwhile in Storybrooke, everyone is having a lovely time, having coffee, looking for the author, and finding the spell to set the fairies free of the magic hat. Until they also set a demon free (of course) and the town's back on red alert. Again.

It really was nice to see everyone in the town having a brief moment of happiness. Even Regina's gleeful destruction of the bird painting was delightful. 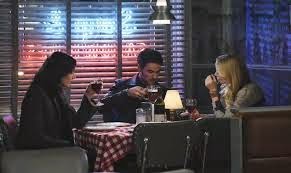 But there are still shadows. Hook is feeling guilty for the things he did while under Rumple's power, Belle is dealing with the fact that the love of her life had to be banished in order to protect everyone. And Regina has still been deprived of her happy ending with Robin.

I was rather underwhelmed with the super secret ceremony to release the fairies from the hat. There wasn't even a spell or anything. Though the show runners seem to like having characters stand in the woods in a circle around some sort of glowy thing.

Here are the dangers of getting your information from unknown online sources, kids. You just might release a demon into the world.

Also, I would just like to say that it is quite obvious no librarians work on the show and there are problems with having paraprofessionals run your library. Can anyone ever find anything in that place? Because I can't figure out the cataloging system. Ahem. Sorry, librarian rant over :)

I love the little moments of the town gathering together and the sweetness developing between Emma and Hook.

And I love Regina's response when they hear the demon roar, "I suppose we should go out and see what's killing property values this time."

Also loved Emma learning that the hat is a one-time use: "Great. So our best defense against evil beasts follows the same rules as chicken pox?"

I'd also like to say that if the town didn't have monster procedure down by now I'd really be worried. As Hook said, "This isn't our first monster bash."

And for my final favorite quote of the episode, I had to crack up when Regina asked, "Is there a dwarf called Evilly?" 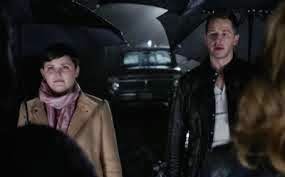 I understand them giving Cruella and Ursula a chance. After all, they are the second chance town. What I don't understand is why on earth they didn't take the scroll back after letting them in. These are the stupid things they do that drive me crazy because the characters are too smart for it. They just become plot points and it makes me want to scream.

Snow and David Charming have more dark secrets. *sigh* I don't know how I feel about them wedging more out of the backstory of these two. We'll see how it goes. 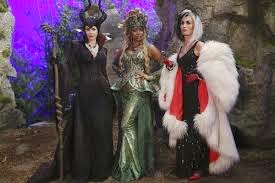 But speaking of backstory. I'm totally surprised that Cruella and Ursula even said a word to Rumple without running him through. After what he did to them?

I like the concept of Cruella having control over animals - I was wondering if they were going to tweak the character in some way.

And the three of them on a road trip? Hilarious. And shout out to Mr. Cluck's Chicken Shack. Nice hearing "Have a cluckety cluck cluck day" again.

So Rumple's back in Storybrooke and we've got two new baddies. Regina and Henry are hunting down the Author and the Wizard is still wandering around somewhere. Plenty of ground to cover in this half of the season.

What are you looking forward to?
Posted by Rebecca T. at 10:00 PM

Email ThisBlogThis!Share to TwitterShare to FacebookShare to Pinterest
Labels: Once Upon a Time, Rebecca T., tv