Once Upon a Time - Enter the Dragon

Tonight the dark forces continue to work together to bring about their evil plan while Regina tries to prove she can still bring the bad, Rumple does some impersonation work, the good guys run around not doing much of anything, and we welcome back an old friend. Meanwhile, in the flashbacks, we finally get a glimpse into the middle space between Snow's betrayal of Regina and Regina's full-on Evil Queen bit.

I do have to say that I loved how worried Emma was about Regina. They've really gotten close and become friends - something no one could have expected. And Regina, though undercover with the big bads, is feeling mighty uncomfortable. Because she's not one of them any more. And with the flashback we see glimpses of the innocent young girl who lost everything. Yes, her broken heart broke her before, but she has grown so much as a character that I think Rumple is wrong - I don't think the broken heart will be enough to break her this time. 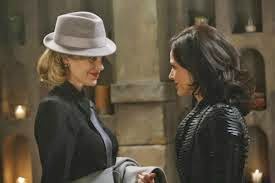 The biggest difference I see is the one thing Regina has learned that Maleficent and, especially, Rumple have not learned - that revenge is not the same as a happy ending and destroying someone else's happily ever after can't fix yours.

I know it's weird to say, but I'm glad they knew Regina was just looking for information. They're all too smart not to have seen through her. If they had actually bought her story I think I would have been rolling my eyes. 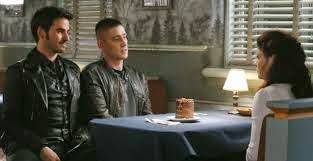 At first I was all proud that Killian was kind of a bit ahead of everyone. Obviously they'd be after the dagger. That's using your head. But then something just felt ... off? I especially didn't feel like he would be going behind everyone's (EMMA'S) back anymore. So as Belle was showing him the dagger I knew what was really going on. And Rumple takes the risk to go back into the center of Storeybrook to have a last conversation with Belle and try to find out how serious her thing with Will is. That part was sort of sweet, but honestly, the charm of Rumple and Belle has worn off. Rumple's continual return to being The Dark One has me pretty much convinced he doesn't deserve a happy ending - not because he's "A Villain" but because he continually makes choices that place him in the villain role.

Which leads me to what I thought was the most significant quote of the episode - when Regina tells Emma, "They're taking a page out of the hero's playbook. They're working together. We have to take a page out of their playbook and break some rules." If there is one thing they all should have learned by now, acting like a villain will never ever turn out well and will never get you what you want. 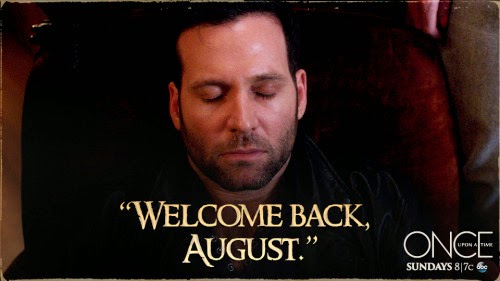 On another note: It does seem like Maleficent should be thankful to Regina, so I'm looking forward to the flashbacks that show us how everything between them imploded.

AND FINALLY AUGUST IS BACK?! WHAT?!

I know I'm looking forward to next week's episode!
Posted by Rebecca T. at 10:02 PM