Once Upon a Time - Unforgiven

Tonight we find out that the Charmings aren't quite as good as we thought they were while Cruella and Ursula work with Rumple to free Maleficent. Emma is finally settling into who she is and beginning to trust and Regina's making strides away from evil queen.

Though we don't get the whole story, the Charmings saved Emma at the cost of Maleficent's child. I'm just wondering who the father of Maleficent's child was. And I'm sure we'll get more pieces as the season progresses. For now, though, the secrets and lies are really starting to pile up and, of course, this is all going to blow up in their faces when Emma finds out the truth. Because she of course will find out.

It really was amazing to me how many times David and Snow lied this episode. Pretty much more than they've ever lied in the previous four seasons. Even with Emma calling them on their bologna.

And, by the way, Emma's become like a human lie detector - she knows when people are hiding things from her. But she's also much more trusting than she's ever been. She and Hook are freakin' adorable together. I just want them to walk down the street hand in hand with those big smiles on their faces forever.

Which means they're going to have something horrible happen to rip them apart, right?

I find it convenient how many times the challenges to get to the magical tree (or whatever) match perfectly up to the people needed to face those challenges - like the 3 challenges last week that Maleficent, Ursula, and Cruella had to face.

I was loving spunky Belle giving Cruella and Ursula all that sass. But her and the Knave? Isn't that moving a little too fast? That kind of creeped me out.

Cruella won line of the day when she called David "Sheriff Chisel Chin." 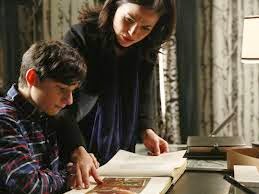 Isn't there some sort of memory spell they can cast to help Pinocchio remember what August knew? Hopefully Regina finds something in the things Gepetto held onto. Her apology was definitely a step forward. Each week she does something else to cement her desire to be a hero instead of a villain. Will all that go down the tubes when she goes under cover?