Once Upon a Time - Poor Unfortunate Soul

Tonight we got another glimpse at Hook's back story along with the connection between him and Ursula who is apparently a conflation of herself and Disney's Little Mermaid which leaves Ariel out in the cold and not the daughter of Triton? (did this come up before?) Anyway. In the present, Regina is still part of the cohort of villains, though they obviously don't trust her, and August becomes a puppet and then a real boy again and gains a few nose inches. Killian finds how hard it is to shed his villainous past and many more questions are raised about whether any villain truly can have a happy ending.

First I would just like to say that Snow talking in Regina's voices was so bizarre. 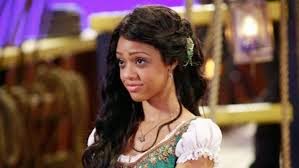 Revenge is the theme of the episode - what will people do to get it, how much are they willing to sacrifice, who are they willing to hurt? Rumple continues to be so focused on revenge that he's completely unable to see anything else. In the flashback Triton destroyed his relationship with his daughter because of his desire to avenge his wife's death. In the flashback Killian destroyed Ursula's happiness because of his blind pursuit of Rumple, but in the present he's reminded that revenge will only destroy him. As I've been saying for a while, this is the main difference between Killian/Regina and the other villains - they are learning how to do things in a non-villainous way. 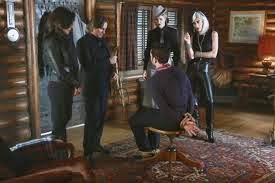 Ariel's comment to Killian was key. He said, "Maybe Ursula was right. Villains can't get their happy ending," and she responded, "That's because villains go about getting things the wrong way."
EXACTLY. Just look at Regina. She wants Robin, she wants her happy ending. But instead of killing Marian or blasting around town, she started doing research and working with others to find a way to get a happy ending without hurting everyone around her. This is why she no longer fits with the villainous crew. Who knew she'd ever be so uncomfortable with evil plots.

Meanwhile Snow and David are keeping a horrible secret and because they aren't going about things the right way, every decision they make is tainted. Their conversations, their plans - all feel wrong, and they're going to destroy something before this is all over. Actions and motives speak louder than larger labels like hero or villain. Or so it would seem.

So can villains get a happy ending? Ursula's turn of events would certainly seem to lead us to believe they could. And of course, Killian has his happy ending (though I see it more as a middle or even a beginning than an ending, but you get the point). When Emma asked what his happy ending was I wanted to bang my head against the wall. duh it's you silly. But hearing Killian say it was so sweet I'll forgive that moment.

On two lighter notes, Maleficent won for best line of the episode when she told Regina, "If you're having trouble sleeping, I have something that might help" HA

And Emma's EPIC MAGIC CASTING POSE will never not be funny to me.

Next week it looks like we'll get to see what Snow and David's deep dark secret is. Here's hoping it's actually deep and dark after the doom and gloom build up.
Posted by Rebecca T. at 9:35 PM