Once Upon a Time - The Brothers Jones

This week on Once Killian's brother returns to two-face his way back into his brother's life. Meanwhile Henry's feeling stuck on the sidelines again (I can't imagine why he would possibly feel that way /sarcasm) and heads out on a quest of his own, willing to help a villain in order to feel needed. 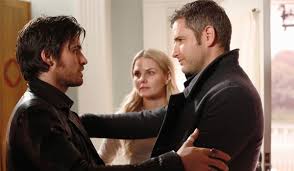 Something about Liam rubbed me the wrong way from the first moment he showed up on their doorstop. His sanctimonious air just seemed too put on. In the flashback, I thought he was going to give Killian the commission in order to get him away from Silver, but when he ripped up both contracts I knew it wasn't going anywhere good. Because if he really thought Killian couldn't do good without him that's really arrogant and demeaning to Killian. I guess there is some nobility in giving up his own chance in order to stay with his brother, but the way he does it just feels over the top. Whenever someone presents themselves as completely righteous, they're usually covering something up.

And what a doozy. I mean, it's one thing to trade your own soul, but to trade the souls of a whole crew of men just to get your commission? That's outright cold.

I wasn't sure how I felt about Liam gaining closure through sacrifice rather than forgiving himself, but really it's pretty perfect. He hasn't seemed to have a hard time thinking well of himself or excusing his behavior. Liam's problem was putting himself first even in martyring himself. This was a true act of sacrifice where he would gain nothing from it.

And in the process, Hades loses 6 more souls. Which brings me to another question - why did Hades just poof away when Liam's closure came? Is that light magic that he can't stay close to? 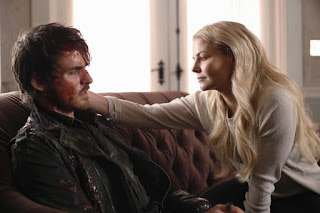 We finally get a couple of happy moments with Killian and Emma, though, and Killian seems to have made some peace with himself due to the run in with Liam.
Also, their exchange:
Killian: "Hades sort of knocked the handsome out of me"
Emma: "No one's that powerful"
so adorable.

I can't wait for James and David to meet actually. That will be so fantastic. 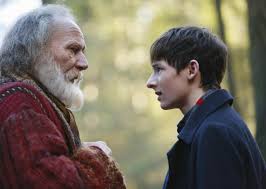 As for Henry (by the way I love that Henry can't say Cruella's name. It cracks me up.), I totally get his frustration. I know they're trying to protect him, but he's held his own (and been the key to breaking several curses, etc.) quite well. It's time to let Henry be full on part of the team now, people! And I love that he's figured out how to use the pen in the right way! How brilliant to use it to find out more about Hades.

I was excited about getting more Hades backstory until that last scene. WHY WHY DOES EVERYTHING KEEP COMING BACK TO ZELENA. *sobs incoherently*
Posted by Rebecca T. at 8:00 AM