Once Upon a Time - Devil's Due

In tonight's episode Rumple deals with some unfinished business by continuing to prove that he is a power hungry, selfish man who will always do what is in his own best interest no matter who else it might hurt. And I'm not just talking about the flashback. We also finally get the Emma/Killian reunion <3 Meanwhile Regina is dealing with some unfinished business of her own, learning about the meaning of the gravestones in the cemetery and that her first love is at peace.

Definitely a better episode than last week (though almost anything would have been tbh). ahem.

I liked that we got to see more of Milah and understand her perspective a bit more. She can definitely be harsh and I'm not excusing her, but she seemed more relatable and her reasons for leaving Rumple a lot more complex.

One thing I'm not clear on though, is that if Nealfire was her unfinished business and she found out that he's moved on and she's confessed and apologized, why wasn't she able to move on? Why didn't the light appear for her? Or can it only happen in that crevice-y place? And if so, well that just stinks. She didn't deserve that fate. Oh and I'll be coming back to that in a little bit.

Rumple's explanation to Milah about her connection to Emma made me laugh because I hadn't really put those pieces together although I've certainly pondered the very bizarre and twisted family tree connections. But I hadn't realized that Emma had dated Milah's son and ex. Timey-wimey mess.

I'm so happy Killian is back with Emma, but I'm also concerned over the fact that Hades just let them leave. I realize it's all caught up in the gravestones he didn't carve, but I have a really bad feeling that there is more to Hades' plan than that. (also annoyed with the next preview because for reals can we just let Emma and Killian have a single episode of not being ripped apart or breaking up with each other?)

Also, how did Emma get Killian back across that tiny little beam that she almost couldn't cross on her own? Or did Rumple just poof them very conveniently?

Regina and Cruella are hilarious together. Underbrooke gave me the biggest laugh of the night I think. And Regina saying good-bye to Daniel made me so happy-sad. Also... yay that Regina has her magic back! Though I wonder if it means she's more connected to Underbrooke now.

No wait. My favorite line of the night was when flashback Rumple told the magic man "I don't know much about deals." That made me laugh right out loud.

I seriously want Belle to be less of a Rumple plot device and more of a character in her own right please. *long sigh* 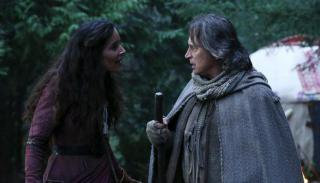 And Rumple. I want one person to try to defend his treatment of Milah. I am so done with him. I don't want Belle with him. I don't want him anywhere near Henry or Emma or Killian or Snow or David or Regina. He cannot possibly redeem himself. I've been saying this for a while. Rumple is not good. He never has been and he never will be. Just because he occasionally helps someone else out doesn't mean anything, because pretty much every time he's only done it because it also benefits him in some way.

I actually do find this interesting because a big thing on Once is the redeemability of people and the fact that they can change and can turn themselves around. They can become the hero. It's pretty realistic, though, that not everyone would want to be redeemed and I guess Rumple fills that spot. So it's not that I don't want him on the show, but it's driving me crazy that anyone even tries to believe or trust him anymore.

As for that contract I think I might have found a loophole. Of course it depends what was actually agreed on, because we don't get to see the actual bargain being made. But. Wasn't the deal for a child of his and Milah's though? Not just his? When he tells Milah about the deal he says he sold "our" second born. Not "my" second born.
Posted by Rebecca T. at 9:47 PM