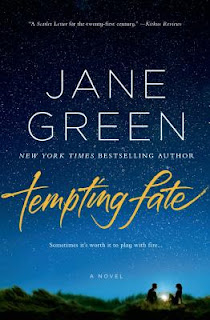 When Gabby first met Elliott she knew he was the man for her. In twenty years of marriage she has never doubted her love for him—even when he refused to give her the one thing she still wants most of all. But now their two daughters are growing up Gabby feels that time and her youth are slipping away. For the first time in her life she is restless. And then she meets Matt…
Intoxicated by the way this young, handsome and successful man makes her feel, Gabby is momentarily blind to what she stands to lose on this dangerous path. And in one reckless moment she destroys all that she holds dear.
Consumed by regret, Gabby does everything she can to repair the home she has broken. But are some betrayals too great to forgive?  - janegreen.com 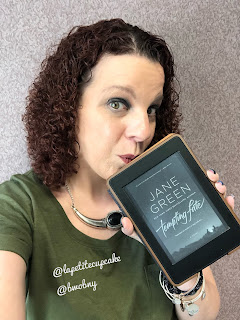 I picked up Tempting Fate as I learned it was adapted into a Lifetime Movie as part of Lifetime’s “Book to Screen” series of Summer films. Tempting Fate premieres this Saturday at 8PM EST and stars Alyssa Milano as Gabby. To Have and to Hold, and Family Pictures also by Jane Green debut on the subsequent June Saturday’s followed by five films covering V.C. Andrews’ Heaven series.

Green did a great job of showing how one mistake can have a ripple effect and affect not just your life but all those around you. I found Gabby to be both very selfish but also sympathetic. She resents that her husband had a vasectomy after they had their two daughters as she always wanted a third child. She so angry that her wants weren’t met and she didn’t seem to care what his were. Eliot seems nowhere the neglectful spouse she describes him to be. She complains about financial issues despite being married to a MD and not fully pursuing her furniture crafting business or trying to contribute financially to the household. However despite all the annoying things she did, I felt really bad for her as her dalliance with Matt seemingly wrecked her life as she felt true remorse and finally started seeming more mature than her teen daughters.

Tempting Fate was a quick read with soapy twists and heart.

You can meet Jane Green on tour with her latest novel, The Friends We Keep. 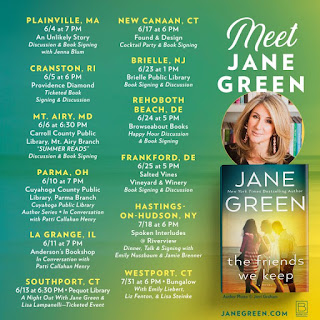 What Jane Green books have you read? Are you excited about the film adaptations? Share with us in the comments.

Special Thanks to the Ramapo Catskill Library System for the e-book.  If you're not already checking out e-books from your library - what are you waiting for?  It's easy and free!! Support your local libraries.  Also many thanks go out to my favorite library employee who helped me renew my card recently!
Posted by Jenn N. at 10:00 AM