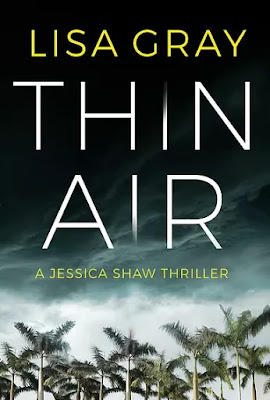 Private investigator Jessica Shaw is used to getting anonymous tips. But after receiving a photo of a three-year-old kidnapped from Los Angeles twenty-five years ago, Jessica is stunned to recognize the little girl as herself.
​
Eager for answers, Jessica heads to LA’s dark underbelly. When she learns that her biological mother was killed the night she was abducted, Jessica’s determined to solve a case the police have forgotten.

Meanwhile, veteran LAPD detective Jason Pryce is in the midst of a gruesome investigation into a murdered college student moonlighting as a prostitute.
A chance encounter leads to them crossing paths, but Jessica soon realizes that Pryce is hiding something about her father’s checkered history and her mother’s death.
To solve her mother’s murder and her own disappearance, Jessica must dig into the past and find the secrets buried there.

But the air gets thinner as she crawls closer to the truth, and it’s getting harder and harder to breathe. -lisagray.com


Thin Air was like a mash-up of some of my favorite things.  The initial premise of a young woman who discovers she may have been a kidnapping victim as a toddler is the same initial premise of one of my favorite books, Caroline B. Cooney's The Face on the Milk Carton. In The Face on the Milk Carton, Cooney did a fantastic job of detailing the conflicting emotions one would likely feel in this situation.  For me, Jessica's reaction in Thin Air was very undeveloped.  She didn't really seem that shocked to discover that her late father had lied to her about her mother and her background. Perhaps, she was just repressing a lot of emotion as she was still recovering from her father's unexpected death but I would've liked to have seen that explored more.

Thin Air is told from various points of view at alternating timelines some from the mid-90s when Jessica was first abducted and in the present as Jessica works to solve the mystery of her past and Detective Pryce works a mystery in the present.  The flashbacks and alternating points of view wove together nicely and reminded me of one of my favorite shows, Cold Case.  While Pryce and Jessica cross paths on a personal level, I really thought Pryce's case would've been best told separately in another novel all about him or perhaps he and Jessica will team up in subsequent novels and work together.

When we meet Jessica, she is living a nomadic life doing PI work throughout the United States.  She reminded me a little of Lee Child's Jack Reacher except Jess travels with a lot more clothes and toiletries.

This was a sharp little thriller and it will keep you guessing but I hope subsequent installments in this series delve deeper into Jessica's emotional state, her connection with Pryce and I hope we see her "friend" Jack Holliday again.

Special Thanks to Netgalley and the publisher Thomas & Mercer for providing a free digital ARC in exchange for an honest review.