The Next Best Thing by Jennifer Weiner

One of the highlights of Book Expo America was having the opportunity to meet Jennifer Weiner, best-selling author of hits such as "Good in Bed," "In Her Shoes," and the book I received from her at BEA, "Then Came You."  Jen gave a hilarious and motivating speech at the Blogger Con prior to BEA.  You can read the transcript of this speech on her blog.  She enthusiastically hyped her new novel, "The Next Best Thing," which will be released on Tuesday, July 3.  I was fortunate enough to be able to receive an advance copy of the novel and I read through it at a rapid pace; it was hard to put down.  "The Next Best Thing," is perhaps thee best thing Ms. Weiner has written.

"The Next Best Thing," follows Ruth Saunders, an aspiring 28 year-old writer who lives in Los Angeles with her grandmother.  Ruth's parents were killed in a car accident when she was just a little girl.  Ruth survived but suffered severe facial scars that impact her self esteem.  However, Ruth is determined to realize her childhood dream of writing and producing a sitcom as warm and funny as the ones she grew up with.  When her dreams are realized and she gets produce her show, "The Next Big Thing," she soon discovers it's not as dreamy as she thought when meddling executives, temperamental actresses, and budgets threaten her creative vision.  On top of that she is trying to cope with her grandmother's engagement and her unrequited crush on her adorable boss, Dave.

I loved this novel.  I've always wanted to be a screenwriter.  I went to college with dreams of being a writer/producer.  I've got tons of ideas and scripts that never went anywhere so it was exciting to read a story about a girl who gets to live that dream.  While Ruth's experiences prove that it isn't quite as wonderful as you'd imagine, she was so motivated that it made me motivated. I also enjoyed Ruth's grandmother's Hollywood experiences as an extra and her relationship with Maurice.  It was so refreshing to read about a 70 year-old who still lives boldly. It was also interesting to read about Ruth's (seemingly) unrequited love Dave.  His paralysis didn't get in the way of his dreams either.  While this novel is full of heart, it doesn't shy away from criticizing Hollywood's quirks.  Ms. Weiner was the co-creator and co-executive producer of the short lived ABCFamily sitcom, "State of Georgia,"  so she certainly has first-hand experience of the tribulations a showrunner would face.

I encourage everyone to read "The Next Best Thing."  You'll laugh, you'll cry, you'll stay up all night reading it!  You can read a sample of the novel, here, where you'll also find a list of all the places where you can pre-order it. 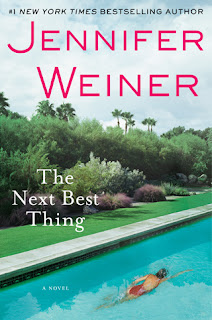 What's the next best thing to a sit-down interview?  An email interview, of course.  I recently had the opportunity to interview Ms. Weiner via email for a brief chat about the novel, writing, and The Bachelorette.


You said on Twitter that “not a lot” of “The Next Big Thing” was related to your “State of Georgia” experience.  Could you share a situation that was?

For an episode about the girls falling for a pair of grow-your-own-everything urban farmers, we had to cast a goat. Easy, right? Except the goats had head shots. And resumes. And reels. Eventually, I just went with the grand Hollywood tradition of hiring the skinniest one...but that was too funny not to use in the book.

I loved the relationship between Ruth and her grandmother.  Was this relationship inspired by your own life and if yes, how so?

My Nanna -- God love her, she's 95 and totally with it – and I are very close. We didn't grow up living near each other, but she's very much a part of my life, and my daughters' lives, so I used a lot of her character as inspiration for Grandma Rae.

How did you research the experiences of someone who uses a wheelchair like Dave?

Priscilla Hedlin, who blogs as Wheelchair Mommy, was nice enough to read an early version of THE NEXT BEST THING and tell me what I got wrong and right.

Ruth is a huge fan of “The Golden Girls,” and classic 80’s sitcoms.  What were some of your favorite shows as a child?

I wasn't allowed to watch TV as a kid! My parents were very strict, so it was PBS and maybe, if we were lucky, some Mutual of Omaha's Wild Kingdom. But when I was old enough to watch on my own, I loved "The Golden Girls," and the friendship among the four women, and the notion that you could build your own family -- find people you love and make a life with them.

You have a lot of advice on your website for people interested in getting their novels published.  I’m 30 and have been writing screenplays as a hobby for over a decade.  Do you have any advice for budding screenwriters?

Not so much...I'll have to think of some, and add it to my website. I don't know that I'd recommend my path -- move to Philadelphia, write novels until someone notices them -- to other wannabe screenwriters. You kind of have to move out there to make it happen.

Could you briefly describe your writing process from idea to finished project?

I come up with a character -- a voice in my head, an idea of who this woman is, where is and where she's going. Then I'll outline, start writing, veer wildly from outline, rewrite, and have a draft after about six months. My agent will give me notes, I'll rewrite, then give it back, then she'll give me more notes, and I'll rewrite again. Same thing happens with my editor...and then we're done, about 10 months from the start!

You’ve written two novels about Cannie Shapiro.  Do you have any plans for new stories about characters from your other novels?

Not at the moment, but we'll have to wait and see.

You’ve been very vocal in your criticism of The New York Times for not giving fair recognition to female writers.  What books by female writers, besides your own of course, are you most excited about lately?

I just posted a summer reading list on my blog, with lots and lots of great female authors: http://jenniferweiner.blogspot.com/2012/06/first-can-i-kvell-there-is-amazing.html.

How do you find time to write, blog, tweet, promote your work, and raise a family?

LOTS of help. Seriously. Tons. I have an assistant and a sitter who both work eight-hour days, and in the summer my sister and my mom pitch in, and my daughters go to camp, so I have part of my days free for writing.  I worry sometimes that my daughters will remember me as faceless-woman-behind-computer...but I hope they'll see me as someone who found work she loves, and was able to make a living doing it. Which, of course, is what I want for them -- to find work that fulfills them, so they're happy to get out of bed and go to work, every day.

As someone who live-tweets for the Bachelor/Bachelorette, who’d you like to see Emily up with this season?

I think she's got some good chemistry with Arie, but Jef-with-one-F cracks me up. I have a hard time seeing them together, long-term, but he's good viewing.

If you'd like the opportunity to meet Ms. Weiner and ask her some questions of your own, head on over to her blog for details on how you can win such an opportunity.  Or, you could attend one of her signings.

Note: I received no financial compensation for this review or interview.  I just love to promote great books.  Special thanks to Jennifer Weiner for participating in my email interview and her publicist for sending me an advanced copy of "The Next Best Thing."
Posted by Jenn N. at 8:00 AM

This was so enjoyable!! I can't wait to read one of her books now.

Loved the interview :) So much fun.