RL Stine: Review and Book Give Away!

Hello, Down Unders! (And those not-as-under). Later I will be giving away two books by RL Stine, but first! The review!

I did not grow up reading RL Stine. I kind of skipped over a lot of middlge grade, which is one of the reasons why I love reading them now that I'm a little bit older. So last year I read one, and wasn't too excited. I had been able to guess the ending and I was a little bit bored. 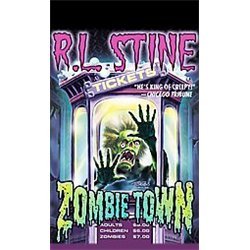 Then I went to BEA and picked up two books by RL Stine to giveaway on the blog, so, of course, I had to read them first. The first one I read was ZombieTown, which was part of a series he wrote back in like, the fifties, but they are now being re-issued by AmazonPublishing. It was short, fun, and easy to get through. After reading this one and keeping in mind the first book I read of his, it reminded me a little bit of a bag of surprise flavor candy. They're enjoyable, they're quick, and they're just enough of the creepy.

The second book was the Wanted: The Haunted Mask book. I enjoyed this one the best. The book is divided into three sections, the first about an old man, the second about a young girl who gets stuck inside a mask that takes over her personality (terrifying to think about), and the third is about a young boy living out in a pumpkin farm. I loved how everything was twined together, and how the three stories came together in the end. I liked the characters. I especially liked the pumpkin one. It reminded me of JT Petty's book, The Squampkin Patch, which I'll be reviewing at a later date. The book was a lot of fun.

For kids looking for a bit of a scare and a good thrill, I most definitely recommend RL Stine. PLUS he has like a bazillion of them, so if you like him you have a lot to choose from and you don't have to worry as much about being sad when they're all over.

NOW for the giveaway details. I will be giving away both of these books. There will be two winners. The first will win the ZombieTown book, and the second drawn will win the Wanted: The Haunted Mask one. To enter fill out the form from Rafflecopter AND in the comments share something bizarre that you were scared of when you were little. Or. Not so little. Especially the weird ones (if you feel so inclined). OR, if you weren't scared of anything bizarre when you were little, leave a comment of something EXTREMELY WEIRD that you are glad you were never afraid of.

This is for fun and a judge-free zone. To prove to you that I don't care how bizarre your fears are I will share with you something I am STILL afraid of TO THIS DAY. Ahem. Ready? I am afraid of mustaches flying off of men's faces and attacking me. For reals. I am not making this up. I still am. I blame it all on Robin WIlliams. When I saw his face I just knew his mustache was going to jump off and attack me and I have been terrified of bushy mustaches ever since. IT IS HORRIBLE. 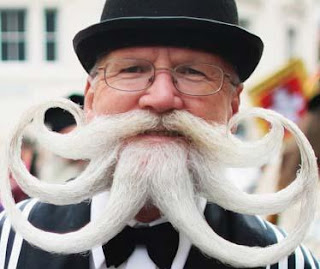 TERRIFYING. Apparently they have mustache CONTESTS. *faints*
I found this terrifying picture HERE where there are mustaches ready to kill people EVERYWHERE.

The contest will be open starting now until Wednesday at midnight. Feel free to tell your friends!

THIS CONTEST HAS BEEN EXTENDED AN EXTRA WEEK! Yay! *throws sparkles* It will now end at midnight on July 4th.

I am and always will be scared of porcelain dolls. I always have nightmares about them chasing and eating me. Probably because I read rl stein's night of the living dummy ;) I love love love the haunted mask!!

I can't participate in the contest but I must share my love of RL Stine's "Fear Street" series. It really sparked my love of horror movies and inspired me to write goofy horror films myself. My friends know I am terrified of clowns and that is actually the subject a little movie project that I'm making with my good friend. I'm also petrified of The Cat in the Hat and naked babies.

The "Fear Street" (and any RL Stein books) were some of the most popular books we had in my youth prison library. I bought them by the dozen from Goodwill because they would be stolen so often. (What a surprise.)

Do they still accept donations?

Clowns! I cannot stand those creepy people. All that makeup is hiding their true evil nature. lol Even my kids think it is funny that I can't get close to a clown without shaking.

Also, my sons-twins 8 year olds, absolutely love R.L. Stine. They have committed to memory every book they have, which is over fifty so far. They love collecting them and they have also did some reviews on them. If you want to check it out:

I So agree! I wasn't afraid of clowns for so long, and was so proud, but there's this one in my town that I SWEAR is going to abduct children and eat them. IT IS HORRIFYING.

I would love to :) I shall wander over there presently.

I still remain, to this day, scared of the dark. I have bad low light vision, so I will blame that :)