On the heels of the success of the New York Times best-seller, "Sweet Valley Confidential," Francine Pascal continues the story of the legendary, Sweet Valley twins, Jessica and Elizabeth Wakefield in the e-serial, "The Sweet Life."  The series of novellas began its release Sunday, July 15, 2012 with Parts 1 and 2 and subsequent installments will be released ever Sunday through August 12, 2012.  So, how is life in the Valley these days? 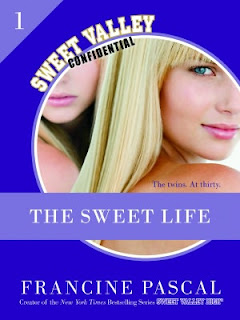 "The Sweet Life," picks up three years after "Sweet Valley Confidential" left off.  Jessica and Elizabeth are now in their 30's.  Jessica is married to Todd and they have a two-year old son.  Meanwhile Elizabeth is content living with Bruce Patman. Steven Aaron are also living together and raising a little girl that they had via a surrogate. Lila Fowler, aka Mrs. Ken Matthews is a budding reality star of "True Housewives of Sweet Valley."  Life seems pretty sweet from the outside but since this is Sweet Valley, it won't last long.

Todd and Jessica's relationship is on the rocks because Todd feels Jess spends too much time at work and not enough time at home.  However Jess loves her green cosmetics marketing job  Even her flirty, sexy co-worker can't distract her from the work she loves but can she resist the affections of Hollywood's biggest leading man?  Elizabeth soon doubts her trust in Bruce when an intern from his company files attempted rape charges against him.  Bruce claims he barely knew the girl but she claims he forced himself on her.  Elizabeth finds herself in way over her head when she decides to use her investigative journalism skills to help Bruce and ease her doubts.  Lila may be a rising reality star but her manipulations to get there bring out the worst in her and may ultimately cost her the one thing she truly loves, her husband.  Elsewhere is Sweet Valley, Steven and Aaron constantly fight over how to properly raise their daughter Emma.

In Part 2, "Lies and Omissions," Ms. Pascal gets a little help from co-writer, Cara Lockwood.  Todd and Jessica have separated and Jessica has made a potential relationship ending mistake.  As Elizabeth gets closer to Bruce's alleged victim, she starts to wonder if she really should be helping him or if the girl's story is actually true.  Lila continues her battle to be a reality show queen but a reality show starlet wannabe is fighting for the title.  Lila's fight will have to get even dirtier.  Bruce struggles to figure out what exactly happened the night he saw his former intern at the bar before blacking out from what he believed to be food poisoning. Bruce's confusion and anger at his inability to remember lead him to a foolish the choice that makes him appear quite guilty.

As Part 3 opens, Todd is reeling from the news that Jessica has betrayed him and begins to pursue a new relationship. Bruce finds himself in more trouble than ever and discovers that not only does Elizabeth not trust him but she has been working with his accuser.  Lila finally has the upper hand and has won the affections of her reality show co-stars, the viewing public and her husband but how long will it last given the manipulations it took to get her there.  Steven and Aaron's bickering over child rearing tactics is soon the least of their worries when their little princess is kidnapped.


I love Sweet Valley.  The more things change, the more they stay the same.  Life is far from dull.  I am disappointed in Jessica though.  Not because she makes a foolish choice with a man at the risk of her marriage but because she ultimately wants to leave her job in an effort to win Todd back.   For once, Jessica has a job that she loves and excels at.  The old Jessica would never, give up on a dream just to please a boy/man.  I still, despite reading about her and Todd's love in "Sweet Valley Confidential" and this serial so far, see what she see's in her sisters ex-boyfriend who she once considered exceedingly dull.  Todd complains Jessica spends too much time at working meanwhile you never hear about him cutting back at The Sweet Valley Tribune where he is a sports reporter.

Lila is a master manipulator and knows how to play the reality TV game.  If only she'd put that much focus in to doing something worthwhile like convincing her best-friend Jessica to keep her job.  Or develop a real relationship with Ken and tell him that she adores him every bit as much as he adores her.

I am also disgusted with Elizabeth.  She has known Bruce Patman almost her whole life and has dated him seriously for three years.  She doubts his story about the attempted rape incident because of another incident when they were both drunk in high school, she wasn't herself and he tried to take advantage of her.  To me, it's quite a leap from being a drunken, horny high school boy to attempting to rape an intern.  Elizabeth has always been very nosy, it's what always made her an excellent investigative journalist.  However, these instincts seem to have kicked into serious overdrive.   Not only is she breaking her journalistic ethics, she's manipulating Bruce's alleged victim worse than the victim ever claimed Bruce victimized her.

I can't wait for next week!  If you haven't gotten sucked into Sweet Valley yet, there is no better time to start.  The e-novellas are only $1.99 a piece.  If you don't have an e-reader, don't fret, the serial will be compiled into a traditional book format in October and will be available at bookstores everywhere.  So, there is no excuse not to continue to support your local bookstores.
Check back in 3 weeks for my review of the concluding volumes of this e-serial.  Hopefully there will be more to come after that!
Posted by Jenn N. at 8:00 AM

Hehe... I have to admit, I read every single SVH book in the series when I was in high school. I loved those books and to see these now? That's awesome! Francine Pascal is doing something right. Her books back then hooked dozens of teenage girls at my school, most of them read them in secret, then tease other readers about their book choices. Kind of funny actually. I can't wait to read all of these now!

I hate the name Todd.

Awesome review!!!!! I need to read these plus Sweet Valley Confidential!

Me too. However Todd is well-suited for this character, it's a bland and drab name just like Mr. Wilkins is.

I read all the SVH, Sweet Valley Twins, and Sweet Valley University books in high school. I still go back and re-read them now even though I'm 30. I just can't get enough.

The e-book for Confidential was on sale for just $2.99 recently. I don't know if it still is.